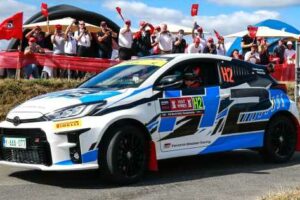 We’re all aware that car manufacturers are looking into alternative, more environmentally friendly fuels to power their vehicles, and the Toyota GR Yaris H2 gives us a glimpse of how hydrogen combustion engine technology might work in a performance car.

Yes, you heard that right, this GR Yaris features a genuine, noise-producing combustion engine, but it pumps out no harmful emissions thanks to its hydrogen fuel. The car has been caught in action being demonstrated at the WRC rally in Belgium, and it looks awesome.

Toyota president and CEO Akio Toyoda climbed behind the wheel of the GR Yaris H2 and was, unsurprisingly, impressed. The boss said the prototype rally car was “fun to drive” and that it produced a sound “like an engine”.

The fact that Toyota’s engineers have gone to the trouble of creating a GR Yaris with a hydrogen-fuelled combustion engine and got the CEO to drive it suggests the Japanese company is very serious about this technology. We certainly prefer the sound of the GR Yaris H2 compared to the silence of an electric car. Check out the Toyota GR Yaris H2 in action below.

Speaking after the demo run, Toyoda said, “I believe that, together with driving using a hydrogen engine, we were able to highlight in Europe the potential of hydrogen as an option for achieving carbon neutrality.”

Four-time WRC champion Juha Kankkunen served as co-driver for the run, and said, “the hydrogen engine put out solid torque, making it no different from a gasoline engine. Because they emit zero CO2, I believe hydrogen engines will become one of the options for achieving carbon neutrality not only in the world of motorsports but also in the world of everyday cars.”

The GR Yaris H2 still uses the original car’s 1.6-litre turbocharged three-cylinder engine, though it has been slightly modified to withstand the more violent explosions that result from hydrogen combustion. We’re yet to hear any details about the car’s performance figures.

Next up, check out Toyota Will Honour Warranty In GR86 Track Day Engine Failure Controversy