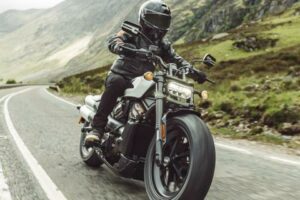 It indicates that the model could soon be launched in the country. The bike was unveiled earlier this week.

Harley-Davidson has listed the Sportser S on its Indian website, indicating that the model could soon be launched in the country. The bike was unveiled earlier this week.

The Sportster S looks like a typical Harley-Davidson with its beefy tires, twin-can exhaust and a wide handlebar with bar-end mirrors.

The bike is powered by the 1,252cc, liquid-cooled, DOHC engine with variable valve timing that revs to 9,500 rpm. It produces 119 BHP and 114 Nm. Harley claims that the engine has been tuned for better low-end and mid-range grunt. The bike gets a 6-speed gearbox and a slipper clutch. It has four riding modes – Road, Sport, Rain and Custom.

Thanks to BHPian Venkatesh recently shared this with other enthusiasts.