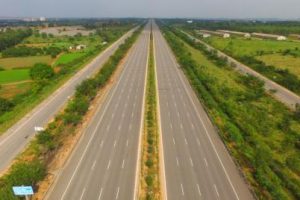 The National Highways Authority of India (NHAI) plans to complete the construction of 23 new expressways and highways by March 2025.

By March 2023, four new expressways including the Delhi-Mumbai, Ahmedabad-Dholera and Amritsar-Jamnagar will be ready, while nine others will be completed by March 2024. Another nine greenfield highways will be completed by March 2025. The new highways will connect various cities across India including Surat, Solapur, Lucknow, Vishakhaptnam, Chennai, Bangalore, Vijaywada, Raipur, Kota, Kharagpur and Siliguri.

The combined length of these expressways is around 7,800 km. The project would require an investment of around Rs. 3.3 lakh crore in the next 5 years.

Instead of widening existing highways, NHAI is building brand new expressways in an attempt to ensure seamless movement of people and goods. At present, cargo vehicles cover about 400 km per day on average, which is 50% less than the global standard. With the new roads, the cost and time required to transport goods across the country could be reduced by up to 50%.

The expressways will be operated on the Toll Operate and Transfer (TOT) model. The investments will be recovered from toll collection over 15-20 years.