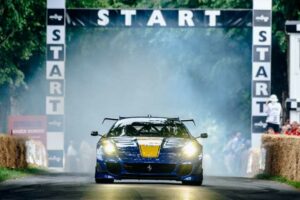 Missed out on Glasto passes? There's a better festival going on next summer anyway

There’s nothing to better combat the doom and gloom of another November than looking forward to days that go on past 4 o’clock. It may seem like we’ve only just finished another summer of glorious Goodwood motorsport, but so vast is the operation nowadays that prep for 2023 is already well underway. And that means there are tickets available right now.

Next year is a huge one for Goodwood; it marks 25 years of the Revival, 30 years of the Festival of Speed, a quarter century of the Road Racing Club and 75 years of the Motor Circuit, which first opened in 1948. So if there was a year to make the pilgrimage, or simply find an excuse to visit just one more time, 2023 must be it.

There’ll be plenty going on, too, with the 80th Members’ Meeting presented by Audrain Motorsport taking place over the weekend of the 15th/16th April. That’s become a real highlight of the calendar since its 2014 reintroduction, shining a spotlight on those post-’66 road and race cars that aren’t eligible for Revival but which are loved by so many. Don’t be surprised if that proves very popular once more, even with Goodwood Road Racing Club membership required. The 25th anniversary Revival will be held from 8th-10th September, 2023.

Festival of Speed looks likely to be the main draw, though, despite no star cars or drivers yet announced. The weekend has established enough of a reputation for itself now that you just know it’s going to be worth a visit. So get 13th-16th July in the calendar now for FoS presented by Mastercard – and don’t go booking any family summer holidays around that time.

Do think about buying tickets, though, as there’s an early bird window (until 31st March 2023 for FoS, and 30 April 2023 for Revival) to save 10 per cent off admission. Goodwood says that Festival of Speed tickets are from £54 and Revival will cost from £67, so 10 per cent off a pair of those is actually a reasonable amount – might even get you a bacon roll. Those who really want to be at Members’ Meeting must join GRRC, which will cost £79 for 2023. As well as getting you in the club for MM tickets, membership means another 10 per cent off FoS and Revival. And if there was a year to attend all three events…

Ghost in the machine | PH Footnote