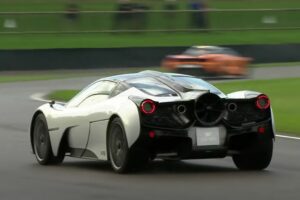 Here it is, the moment we’ve all been waiting for since Gordon Murray announced his new V12 supercar some two and a bit years ago. Yep, we have a fully uncorked T.50 revving its naturally-aspirated V12 heart out, and as you’d expect, the noise is glorious.

What you’re hearing is a 12,100rpm capable 3.9-litre engine powering the T.50’s rear wheels via a six-speed manual gearbox. Although it was pretty damp for the car’s dynamic debut at the 78th Goodwood Members Meeting, Dario Franchitti was more than happy to put his foot down.

Want some more? Of course, you do. The four-time IndyCar champ can also be seen in the video above giving the Ultima-based T.50 development car ‘George’ a damn good hiding. For both of these embeds, we recommend donning some headphones or plugging in a good pair of speakers.

The Cosworth-built engine develops 654bhp at 11,500rpm, with the total output raised to 690 for brief periods thanks to a 48-volt starter-motor generator. That may not sound much in these power-obsessed days, but the T.50 has weight on its side, tipping the scales at under a tonne. The engine itself weighs 178kg.

It’s one of two high-revving V12s Cosworth has developed in recent years, the other being a 6.5-litre unit used in the Aston Martin Valykrie. They’re technically unrelated, although Murray told Car Throttle a little while back that the GMA engine project “benefitted from the background knowledge” of the bigger 12-pot.

To experience the T.50’s high-revving fury first hand, you need rather a lot of money. The price of entry is £2.36 million, a figure which didn’t prove off-putting to the world’s hypercar buyers – all 100 units were sold in the space of 48 hours.