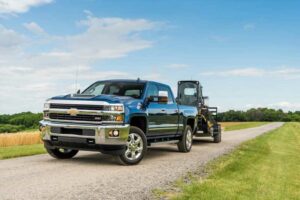 GM is recalling Chevrolet Silverado and GMC Sierra Heavy Duty trucks equipped with a Duramax diesel engine and an optional engine-block heater. A short circuit in the connection to the block heater could cause a fire, the NHTSA disclosed this week.

Some of these trucks had been recalled already for a similar issue that GM labeled recall 19V328. The recall remedy didn’t work. Upon further investigation, GM received 122 complaints and 24 reports of potential fires in a 16-month period between December 2019 and May 2021 after those vehicles had been repaired.

The next remedy may be to disable the feature, GM reported in filings with the NHTSA. Vehicles that have already been recalled and repaired will have the block heater disabled and owners will be offered replacement block heaters and power cords. Dealers will conduct the swap free of charge, and GM will reimburse owners who have had the work done already. GM is still figuring out the best remedy, but in the meantime, owners will be notified of the possible replacement block heaters as early as August 16.