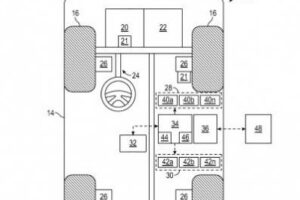 The system will be able to offer real-time feedback to trainees based on their inputs.

General Motors is said to have filed a patent application for a system that could make use of autonomous vehicles to train new or inexperienced drivers. According to a media report, General Motors filed the application titled – “Methods & Systems to Autonomously Train Drivers”, on April 14th, 2022.

As per the filing, the system would make use of sensors to track the student driver’s manual inputs and compare them to the recommended action, determined by a self-driving algorithm. The system will even be able to offer real-time feedback to trainees based on their inputs.

The technology would also allow student drivers to selectively control different functions to further teach them certain aspects of driving. While exact details aren’t available, reports suggest that said functions could include steering inputs, throttle or braking application and lane change manoeuvre; among others.

Having said that, GM does admit there will be moments when a human will be forced to take over full driving controls or other instances when the autonomous vehicle will be in an environment where it cannot navigate. The company does point out the benefits of using autonomous vehicles for training new drivers, which include reduced instructor bias, improved train schedule availability and lower cost of teaching.