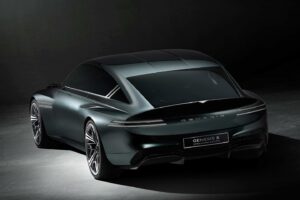 A four-seat fastback reimagined for the EV age? Sign us up!

If Genesis’s combustion-engined efforts in the UK thus far haven’t been star performers, then its imminent electric cars show much more promise. There’s the 435hp GV60 SUV (with drift mode) first off, then whatever else might be planned using the very impressive Hyundai/Kia EV box of bits. There could be a Genesis take on the Ioniq 5, for example. And maybe one day, if we’re lucky, an electric vehicle something like this concept, the X Speedium Coupe.

Speedium, before you say anything, is a racetrack in South Korea, and not just some made up name from too much time on Mario Kart. The car itself is an evolution of the Genesis X concept seen last year, now evolved from a coupe into a kind of fastback shape. Traditional two-door into a Gran Coupe-style four-door, you might say.

Once again this is the work of Luc Donckerwolke, who said of the Inje Green Genesis (colour inspired by the mountains near the Speedium racetrack): “We are giving each design element space to breathe… It’s not about making the design elements compete with each other, but about orchestrating the elements so that they complement and respect one another.” Which is exactly what we were going to say, too.

The Speedium undoubtedly looks like a Genesis, which is largely the point – this is intended to preview what can be expected from its new wave of EVs. The brand intends to have an all-electric, six-car range by 2030. There’s already an electric G80 saloon in Korea, with which this car shares the Genesis wings and ‘Two Lines’ design language (see the lights and the side profile), so it’s not too much of a stretch to see something like this replacing the current G80 and rivalling cars like the forthcoming Audi A6 e-tron.

Looks quite cool, doesn’t it? Obviously big wheels and moody lighting help all concepts, but this is arguably the best incorporation of those Genesis cues and the ‘Athletic Elegance’ yet. And we’re always going to support some kind of ducktail spoiler. A big hatchback should even make it quite practical, too. “This isn’t a show car — it’s a look into our design processes as we explore ideas for the next wave of EVs, one that incorporates Genesis’ DNA”, remarked Donckerwolke.

The GX Speedium Coupe was revealed at Genesis House in New York, which is the brand’s home in the USA. While a new concept from them is a bigger deal across the Atlantic (given its much greater presence in America), a few more cars like this ought to have Europeans paying attention. After some fairly ordinary petrol and diesel cars, you might argue for UK customers that Genesis’s electric era can’t come soon enough.