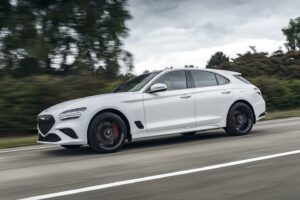 Genesis has made a decent start in Britain; now it's time to get interesting

Worthy though the G80 saloon and GV80 are, neither saloon nor SUV are quite what you’d call core PH metal. The G70 Shooting Brake, on the other hand, looks a lot more up our street – because fast estates always are.

Having been revealed a couple of months ago, the G70 SB is now out there in real life, waiting for the throngs at you know where to have a poke around. This is a right-hand drive, UK-plated Shooting Brake, too, so presumably an actual launch over here can’t be far away.

Now, Genesis is very proud of its launch film for the G70 SB (which can be watched below), a one-take drone bonanza guest starring the Duke of Richmond. Certainly, it gives a good view of the new car’s shapely rear end as the drone tracks it up the hill, and promises a new estate “designed with Europe in mind”, but does seem rather in lieu of new information rather than complementary to it.

So we can only really repeat what’s been said before: just shy of 4.7 metres long, a 40 per cent bigger boot than the saloon and a design characterised by ‘Athletic Elegance’. Still, we can all surely agree the G70 is still quite the looker even in the confines of Goodwood House, the red car shot in a studio especially fetching in fact. And you thought a VW Arteon looked good…

Dominique Boesch, MD for Genesis in Europe, said: “We are thrilled to be here at Goodwood today to reveal this pivotal model for Genesis, our fifth car in the region. The iconic British festival, watched by millions, is the perfect destination to unveil our bespoke product tailored for European customers.” Which is undoubtedly accurate, though it’s a shame to not know a little more about what’s shaping up to be Genesis’ most appealing model. Hopefully more will follow over the weekend. Until then, enjoy the vid…