Frustrated with my Tiguan: 2 gearboxes replaced, issue still not solved 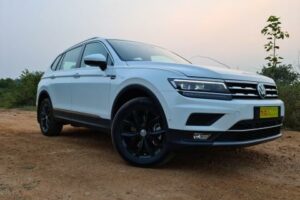 There are many reported incidents which are not visible on Team-BHP. I was also approached by a fellow BHPian Skoda Kodiaq Feb-2022 owner in the NCR region whose car exhibited the same behaviour.

BHPian Dhruv29 recently shared this with other enthusiasts.

I received the car 20 days back with an Oil change service and 3rd gearbox installed. The service centre reported that the problem had been rectified after 80-90km test drive. I took the car back and drove it normally within the city limit and the problem didn’t reoccur.

Today, I took the car to the highway and lo and behold this piece of crap is still not fixed! The ambient temperature was 46 degrees as shown by the sensor. I’m out of options for this “German CBU”. And to be honest I wasn’t even surprised that issue re-occurred because either you give me an answer that this specific part was causing an issue or it’s just hit and trial method. That’s it.

And I can’t even understand how are people even buying VAG Tiguan’s new version. There are many reported incidents which are not visible on Team-BHP. I was also approached by a fellow BHPian Skoda Kodiaq Feb-2022 owner in the NCR region whose car exhibited the same behaviour.

Why is VW sleeping!? Fix your car!? What kind of dumb incompetent engineers are sitting in HQ, who can’t figure out why this specific drivetrain is not working in Delhi-NCR heat. I guess I’ll have to raise the issue with all automotive media outlets as well.

I don’t have any hope they’ll ever come out with an answer. I won’t drive this crap, will drop it off next week at the service centre.

Here’s what BHPian igemini had to say on the matter:

Wow! This is unbelievable incompetency from VW India. At first, they are changing the DSG gearboxes like consumables and yet cannot rectify the problem for good.

Absolutely incompetent service centre as well as engineering teams at VAG factory. It seems they haven’t found the root cause of this issue yet. I think we expect a better quality of service and after sales support from a company like VW. I hope they will get this rectified soon enough, not just for you but also for those who face similar issues. I can imagine the frustration.

Here’s what BHPian rahulk86 had to say on the matter:

Dhruv, while listening to the audio in the present link, couldn’t help but notice that there is a difference in the timing of the sound as compared to your earlier issue. Earlier, your rattle was during a gear shift whereas in the present clip the rattle/knock seems to occur during hard acceleration from a low RPM in the same gear.

I own a Vento TSI DSG and had a similar issue for close to a year wherein on hard acceleration from low RPMs, in gear, would produce knocking sounds and jerks in the car as though the car was not getting sufficient fuel. Predictably, despite several visits to the ASS and replacement of fuel pump, injectors, injection coil, etc there was no change. They suggested DSG replacement, which i refused as car was out of warranty and as there was no jerks/sound during shift. Like your issue, there were no errors being thrown up on scans either.

Finally, i took it to an FNG who diagnosed it as a weak cord wire, basically the wire connecting to the fuel injectors, which resulted in insufficient electric flow to it during hard throttle inputs from low RPMs. Replaced that and the car has been completely fine now for 1 year plus. Maybe an area you can check out.

Here’s what BHPian AKSarkar1 had to say on the matter:

Good God! 3 gearboxes is something that is simply unfathomable and shows that there is a huge flaw from VW’s side. I have had my fair share of DSG woes and that is why I decided to steer clear from certain VW models that have such issues for future purchases. VW India truly needs to wake up, they wouldn’t be able to pull off such stunts in foreign countries where they would be sued almost instantly!

You are right to state that there are other Tiguan owners similar issues, I personally know a person who is sort of in the same boat albeit the extent of problem was not as severe.

Could you please quickly reshare on what level of the escalation matrix has the matter been raised until so far? Hope this problem gets sorted soon!