As the temperatures drop across the UK, Autumn makes itself known once more as part of a fresh new season in Forza Horizon 4. The falling leaves also accompany a new serving of content and new events for all players.

Autumn’s Playlist sees an updated set of prizes available for 50% and 80% completion. This week, arguably the coolest Toyota Supra arrives in the UK. 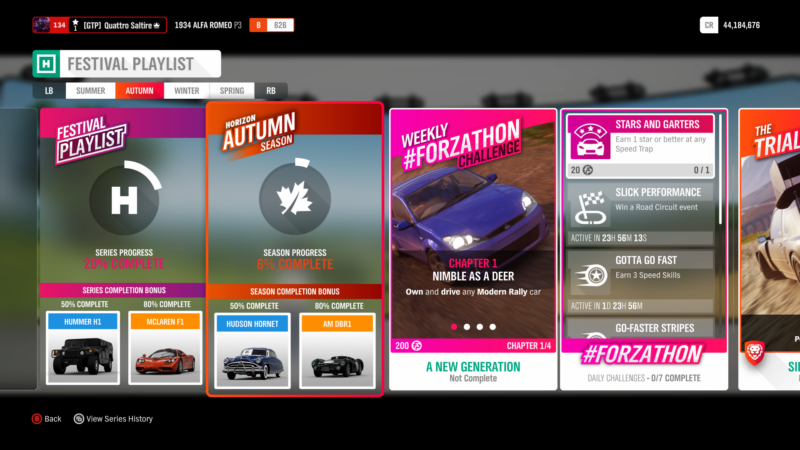 Seasonal completion prizes this week include rare and expensive returning content. One of the highlights is the 1958 Aston Martin DBR1.

A classic racer that is one of the most valuable cars in the world, the DBR1 had checkered success during sports car racing in the late 1950s. It would go on to win the Le Mans 24 Hours in 1959, and still remains the only Aston to score overall victory at the famous race.

Under the hood lies a 3.0-liter straight-six producing 254hp. With 1950s’ technology, the DBR1 will prove a handful to throw around the countryside.

Also up for grabs is the 1952 Hudson Hornet. One of the most iconic American cars of all time, it also comes with prestigious racing pedigree. The Hornet took 40 race wins on the stock car circuit during its competitive life. Unlike other contemporary American cars, the Hornet uses a 5.0-liter straight-six, with 160hp.

This week’s seasonal championship prizes are populated by the BMW M3 GTS and the Ferrari GTO — also known as the 288 GTO.

The big talking point this week is the 1992 Toyota Supra 2.0 GT Twin Turbo. This third-generation Supra is perhaps less well known than its successor, but still offers plenty for fans to be excited about. Under the hood lies a twin turbocharged, 2.0-liter straight-six putting out just over 200hp. Some handy tuning tweaks will help to transform the Supra into a high performance monster. You can pick up the Supra by winning the “Overnight Parts” championship.

The Showcase Remix for Autumn sees the return of “Forest Sprite”. Jump behind the wheel of an Austin-Healey Sprite and take on a team of dirt bikes in a race through the forests.

Events and prizes for this week are listed below. 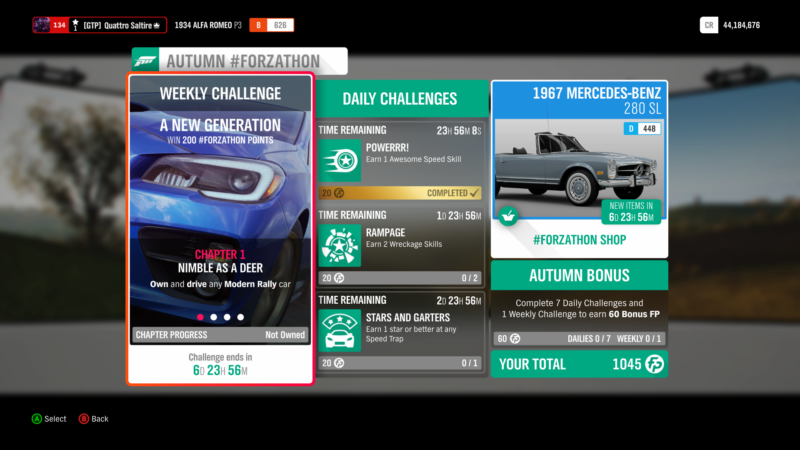 This week’s Forzathon dives into the world of Modern Rally. Grab one of these all-wheel-drive performance heroes to get started.

Next, you’ll need to flex your tuning muscles, as you’ll need to take your car to 185mph. Afterwards, prove the air-borne credentials of your tally-bred machine by earning 15 stars from Danger Signs.

Finally, put your car to the ultimate offroad test, by achieving a podium finish in a Dirt Racing Series series event at The Gauntlet. 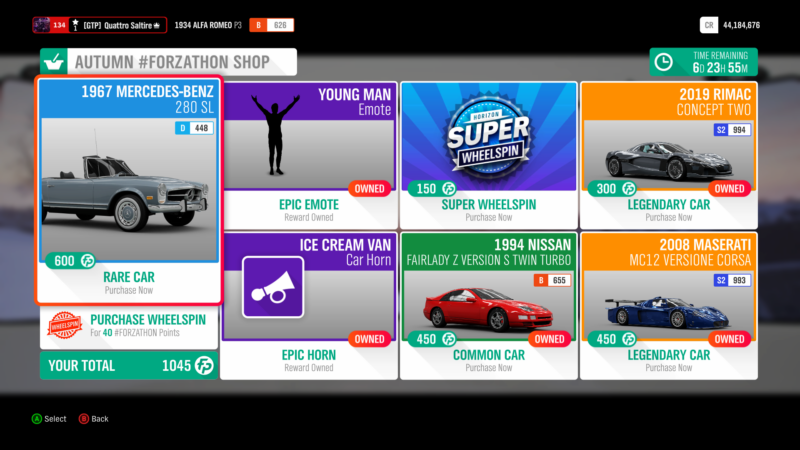 This week’s shop lineup is a busy one, with an extra two cars joining this week. First up is the 1967 Mercedes 280 SL.

Mercedes’ SL badge has adorned some pretty cool motors over the years, and the 280 SL is no exception. The 2.8 liter straight-six may put out just 180hp, but this SL is ultimately designed for cruising by the seaside.

You’ll need to cough up 600 FP for the SL this week. If you want a car to look effortlessly cool whilst driving, then there is arguably no better example.

If you’re after another Japanese icon, there’s the 1994 Nissan Fairlady Z. Like the Supra, this heavyweight bruiser is primed for tuning. With a 3.0-liter, tw-n turbocharged V6 and 276hp, the Z33 Fairlady is no slouch in stock form.

The Fairlady will cost you 450 FP. If you’re keen to compare the A70 Supra with a rival, then now’s the time to grab one.

Still, speed is relative and if you want more power and insanity, there’s the returning Rimac Concept Two from last week, and the Maserati MC12 Versione Corsa. Both cost 300 FP and 450 FP respectively.

Novelty items include the Young Man emote and the Ice Cream Van horn.