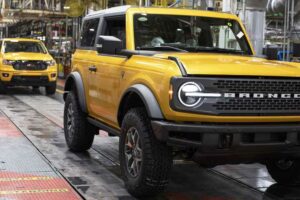 Ford has reportedly planned a significant part replacement campaign aimed at the issues that have affected the hardtop roofs of the full-size 2021 Bronco SUVs. The automaker intends to replace every single molded-in color (MIC) hardtop that every Bronco optioned with it has received, after a spate of issues that have popped up with some of the examples delivered thus far. The replacement process is expected to start in October for those who have already received a vehicle with this option.

A draft of a five-page letter from Ford to dealers has been posted on the Bronco6G forum this week that details the implications of the planned roof replacement campaign.

“An appearance/quality concern on the molded-in color hardtop roof for 2-door and 4-door Broncos was identified,” the letter from Ford reads in part. The issue does not impact the functionality of the roof but can cause unsatisfactory appearance when exposed to extreme water and humidity. As a result, we’ve made the decision to replace all molded-in color hardtop roof panels on all 2-door and 4-door Bronco vehicles produced to date. This includes Bronco which have been delivered, are in transit, and unit which have been built and are awaiting final quality release at the plant.”

The issues reported with the hardtop include discoloration, blemishes and delamination since deliveries have begun earlier this year, with the hardtop supplied by German roof specialist Webasto. While Ford has indicated that some of the issues are linked to environmental factors such as high humidity, the automaker hasn’t suggested just how much humidity or water are needed for this issue to pop up, and it goes without saying that humidity is not in tight supply across the U.S. any year. A replacement program had been suspected for the past few weeks as a possibility, but has become official only this week.

Ford has stressed that the issue only affects the appearance of the hardtop, rather than its functionality, so owners can continue to use the roof with no safety concerns.

But the automaker hasn’t indicated just by what the issues with the hardtops are caused: a manufacturing process, a lack of some kind of surface treatment, or the choice of materials used in roof production itself?

While the replacement program for those who’ve already taken delivery could amount to a minor annoyance, the issue is expected to have a much greater effect on those who’ve only placed their orders but haven’t received their Broncos or a build date. In the same letter Ford states that the automaker will produce fewer Broncos for the 2021 model year as a result of this issue, and will provide an updated timeline in October, which is when the replacement roofs are expected to start shipping. One other nuance of these projected delays is that buyers who’ve placed an order for a Bronco that isn’t a First Edition will have their orders pushed back to the 2022 model year, production of which will start in December. A switch to soft-top roofs in the order process will also be made available to buyers who haven’t received their SUVs.

“As a result of continued roof challenges, we will be producing fewer 2021 model year Bronco vehicles than initially planned,” the letter posted on Bronco6G forum reads in part. “If your 2-door or 4-door Bronco hardtop order has not been scheduled for production yet, except for First Edition, you will be receiving a 2022 model year Bronco. More details on 2022 model year ordering will be available in coming months. 2022 model year production is forecasted to begin in late December 2021.”

So those who’ve already received a Bronco, even with these issues, are perhaps the luckiest ones when it comes to this replacement program.

“To give some substance to this letter, all of this was independently confirmed by my dealer earlier this week,” Kamil Kaluski, Hooniverse East Coast Editor wrote in a blog post. “I have a Bronco on order with no production date scheduled. Of all the orders my dealer took, they were only able to deliver seven vehicles. Of those only one had the 2.7-liter V6 engine. One has transmission issues. All were soft-tops.”

The five-page letter itself, reposted on Hooniverse for easy reading, contains a pretty extensive FAQ for those who’ve placed an order for a Bronco with a hardtop, as there are quite a few nuances to the order priority and production schedules.

Needless to say, this is a pretty significant development for the Bronco, which has already faced a number of delays in its approach to mass production related to the pandemic, the chip shortage and other supplier issues, while the smaller Bronco Sport has had a trouble-free commercial launch.

Do you plan on ordering any SUV this year amid the dealer supply and pricing issues? Let us know in the comments below.