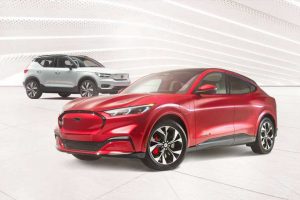 Someday soon, electric vehicles could be as common as conventional gasoline-powered cars as automakers rollout extensive EV lineups, and they’ll be as safe or safer, too, according to a recent study. The Insurance Institute for Highway Safety (IIHS) also announced today that the Ford Mustang Mach-E has earned a Top Safety Pick designation, and the Volvo XC40 Recharge was given a Top Safety Pick+.

To earn a Top Safety Pick+, a vehicle must achieve a Good rating in all six crash tests, which include driver’s- and passenger-side small overlap front, moderate overlap front, and side crash tests, plus tests of roof strength and head restraints. They must also pass front crash protection tests with Advanced or Superior ratings and have Good or Acceptable headlights standard on every model, as does the XC40 Recharge, which starts at $55,085.

The Mustang Mach-E electric crossover, which starts at $43,995, fell short of the higher of the two ratings because its LED projector headlights are only standard on the Premium, GT, and First Edition models and not the Select and California Route 1, which currently have Marginal-rated lights. The California Route 1 is the model with the highest EPA-rated range of 305 miles. Ford told Car and Driver that it develops headlights for its vehicles through “rigorous real-world driving and customer feedback,” and we asked if the result will change the two models’ equipment for the 2022 model year but have not yet received a response.

Additionally, the IIHS-affiliated Highway Loss Data Institute conducted a study of collision, property damage liability, and injury claims for nine models from 2011 to 2019 with electric and conventional versions. It showed that the electric models had 40 percent lower injury claims compared to their gas-powered versions, which is largely due to electric vehicles weighing more. Heavier vehicles tend to offer more crash protection, the group noted.

Last weekend’s Tesla Model S crash near Houston, Texas, resulting in a fire has generated headlines that might make some buyers wonder if electric vehicles are unsafe compared to gasoline-powered cars. None of IIHS’s tests of electric vehicles have resulted in a post-crash fire, though, IIHS spokesperson Joe Young told Car and Driver. “EVs tend to dominate news because of how difficult the fires are to put out,” Young said.

He explained that all IIHS test sequences, whether of gas, hybrid, or electric vehicles, include monitoring the vehicle for something that can result in a post-crash fire. When testing EVs, IIHS sets the battery at 12.5 percent with sensors to monitor temperature before and during the crash. When testing the 2017 Tesla Model S, for instance, IIHS reported damage to the left front corner of the battery. But it was away from the cells, so there were no fire concerns, and it did not affect the car’s crash rating. The only test that resulted in a post-crash fire was in a 1999 Volkswagen Jetta, and it wasn’t related to a gas tank leak, he said.