Ford Ranger gets the MS-RT treatment 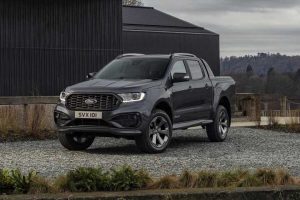 The pick-up market hasn't been short of a butch special edition or two over the years, various Barbarian Outlanders, Fury D-Maxes and Invincible Hiluxes making sure the tough get going across Britain. Now there's another joining the ranks, with Ford having teamed up with MS-RT for another commercial project to create the Ranger MS-RT.

Based on the existing Wildtrak Ranger, the MS-RT sits alongside the Raptor at the top of the Ranger line up. It's described by Ford as boasting a "motorsport-inspired appearance with a premium specification and unique, hand-finished detailing, offering customers a high-end, street-focused version of Europe's best-selling pick-up."

Mechanically the MS-RT is unaltered from the Wildtrak, meaning it's powered by a 213hp, 369lb ft four-cylinder diesel and 10-speed automatic. The majority of the changes ae outside, with 20-inch OZ wheels, carbon effect mirror caps, a new front grille, wider aches and sculpted side skirts plus "an aerodynamic load bar." Certainly it looks quite imposing from here, which is exactly the point.

Additional tweaks for the MS-RT include contrast stitching on the leather seats as well as MS-RT floor mats and scuff plates. Paint choice is limited to Frozen White, Sea Grey or Agate Black. Otherwise it's as you were for the Wildtrak, with SYNC 3 infotainment and heated seats as standard.

As with the Transit MS-RT seen previously, the modified Ranger is available to order through Ford dealers. It's set to arrive in the summer, though prices aren't confirmed. Given the Raptor with which this MS-RT shares so much cost £48,784 in 2019, it's hard to imagine this one being any less than £50k. Still, you can claim the VAT back at least. And be the envy of tradespeople everywhere. Well, at least until the next special edition pick up arrives, that is.