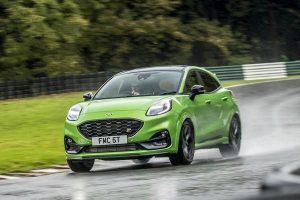 The small, fast SUV sector has plenty of room to grow – but is unlikely to do any better than this

Given the industry's preference for occupying every possible niche, it's a wonder that the small performance SUV hasn't become more commonplace. After all, it was 2013 that the Juke NISMO was first revealed, and nobody needs reminding how long ago that now seems. Nissan even went to the effort of following that car up with a NISMO RS, fitting new springs and dampers, bigger brakes and a mechanical limited-slip diff to improve its lot.

And yet despite that effort – perhaps because of it, for those feeling cynical – the wider market didn't seem to embrace the idea until Volkswagen launched the T-Roc R earlier this year, and Ford has followed it up with this, the new Puma ST. It will be closely followed by the Hyundai Kona N, too, and the floodgates are likely to open thereafter. One only needs to Google 'best small SUVs' to find out just how many teeny tiny 4x4s are really out there, and as most are based on hatcback platforms anyway, they ought to make ideal donor cars for the established performance sub-brands to take advantage of. Where once young lads and ladies might have been enticed into a pocket rocket to begin their affinity with a car maker, who's to say it might not now become the small SUV?

Anyway, the ST. Even without seeing a spec sheet or driving an inch, the notion of a Puma mated with the all-conquering Fiesta ST is an encouraging one. The standard SUV has been awarded numerous accolades in a fiercely competitive (and densely populated) sector, with the ST having been hot hatch of choice pretty much since the first journalist three-wheeled it around a hairpin in 2018. Broadly speaking, something would have had to go fairly drastically wrong for a marriage of the two not to create a pretty good driver's car.

Especially as the Puma isn't all that heavy. (Because that's always the concern when making the SUV, isn't it?) The claimed kerbweight is 1,358kg, assuming a driver weighs 75kg, all the fluids are onboard and the fuel tank is 90 per cent full. A five-door Fiesta ST is 1,283kg by the same measure; to put it another way, the Puma is a Fiesta with another of those 75kg occupants onboard. As we surely all know from scallywagging around with a best mate in a hot hatch, another person alongside doesn't make all that much difference to performance…

And so it proves. Sat higher and reaching further down for the gears you may well be, but a stopwatch would be essential for establishing any meaningful difference between a 200hp Puma and 200hp Fiesta. The former is probably assisted in its perceived rolling performance by a fraction more torque (236lb ft against 214lb ft for the Fiesta) but, whatever the case, there will certainly be no qualms about how the Puma goes. The SUV also shares the engine's character, the tiny three-cylinder giving its growly best through a punchy mid-range yet just as willing to chase every shift light or trundle at low revs.

No-one was likely to have too many concerns about the engine anyway. Nor about the looks; think what you will about the name-calling, but Ford has sold enough of the regular cars already for it to qualify as a success from the outside, and it wears the ST overhaul as well as could be expected. The front is still pinched and a bit gormless, yes, but details like the wheels and exhaust are well incorporated. No – the problem was always going to be about a higher centre of gravity, and where it's left the Puma.

While retaining the Fiesta's fundamental set up, the new model receives its own tune of spring, damper, anti-roll bar and so on to account for the additional, taller weight. This includes a rear beam that's 40 per cent stiffer than on the Fiesta. Which sounds like a lot. And whereas the smaller ST not only gets away with being firm as an energetic tyke of a hot hatch, its initial steeliness fades into the background over time – you don't notice it. The Puma, on the other hand, never, ever lets its driver forget about the additional firmness that's a requirement of the chassis revisions. It's to Ford's credit that Puma isn't crashy or completely insufferable – and this car is a hundred times better to drive than the Juke – but the simple fact is that it possesses a level of abruptness in its ride that's impossible to escape. It's reminiscent of a Focus RS in all honesty, that almost unrelenting stiffness there to counter a heavier kerbweight.

That said, the pay off for such an aggressive set up is an SUV that's better to drive that the vast majority of hot hatches. No, honest. Because although a Fiesta is better still, a car that runs it this close on agility, ability and sheer entertainment is still going to have the measure of many others. The Puma even keeps the slighty-too-large steering wheel with a rack that's a little too alert. It all feels like the supermini, minus the last 10 per cent. Perhaps not even that much.

So the brakes are super strong, the traction in greasy conditions (with an optional Quaife diff) excellent, and the sense of mischief very high indeed. Like its smaller sibling, the Puma is willing and able to rotate off the throttle and on the brakes, the ST being way more mobile (and hilarious) than a car of this billing needs to be. The drive is akin to a Fiesta with the seat jacked up to the maximum rather than an SUV. The six-speed manual remains the perfect partner, too. Perhaps the additional stiffness has compromised ST traction a little, though it's likely anybody behind the wheel will be having too much fun to care.

Which leads us to the inevitable question: if it's so close to a Fiesta ST but also heavier and more expensive, why have a Puma over the Fiesta? Beyond the increase in headroom and marginally easy access and ingress, the real answer is the same as ever: because buyers have a proven appetite for SUV-shaped performance cars and are willing to pay the premium for them. Same reason there's a Porsche Cayenne Coupe, and a 530hp BMW X7, and a pair of Audi Q8 models with the twin-turbo 4.0-litre V8. They might not make a great deal of sense by any logical performance metric – but which business isn't going to proceed with a commercially viable product?

Given that trend, the Puma ST is certainly viable. More than that, Ford should be praised for going the extra mile and making the Mean Green machine better than it needed to be. It would have been easy, surely, just to increase the power and make the Puma look like an ST without giving much attention to the rest. That this car still drives like a great Ford hot hatch, with the odds stacked against it, is a laudable achievement. That the ride has suffered shouldn't be ignored, because it might prove too much for anyone with children to put in the back, but the Puma has proven beyond all reasonable doubt what the Juke never could: the small SUV can be a credible (and enjoyable) fast car. Now it's up for Ford's rivals to match it; on this experience that's going to be a fiendishly difficult undertaking.