Ford Puma | Shed of the Week 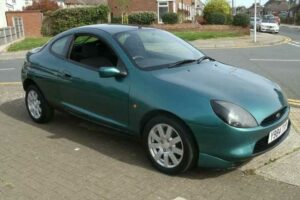 The Puma was a vanishing breed when new. Now, more than 20 years on from launch, it's downright exceptional

Wikipedia defines Pumas as ‘large, secretive cats’. As far as Shed is aware, all cats are secretive, insofar as they can’t actually communicate in any meaningful or useful manner.

Of course, there is more than one type of communication. In the motoring world we talk about a car’s ability to communicate with its driver, and in that regard Ford’s Puma had the beating of any hairy moggy you care to name, from large and secretive to small and gobby.

The first Pumas joined the Ford New Edge range in late 1997. Based on the Fiesta, they came with three engines. Well, they didn’t come with three engines, although if they had that would have been quite something. There was a range of three engines: a 90hp 1.4, a 101hp 1.6, and a variable cam timed 123hp 1.7 unit co-developed by Ford and Yamaha. This was only used in the Puma and was the most desirable choice

Happily, the ad puts our shed down as a 1.7. Less happily, Shed’s inquiries appear to show it actually has the more proletarian 1.6 engine that was used for two years in 2000 and 2001 models. Although this unit had to be caned somewhat to achieve a (high) nine-second 0-60mph time, it didn’t have the 1.7’s sometimes troublesome Nikasil bore liners and its cambelt changes were easier to handle. They didn’t come round quite as often either (10yrs/100k miles as opposed to 5yrs/80k on the 1.7s).

We’re told that our shed’s belt was done at 63,000 miles, which looking at the MOT history would have been sometime in 2012 when it was 11 years old, so not far off the schedule. Plus, irrespective of the engine, you always had the joy of great Puma handling. With well-judged suspension settings and only a tonne or so to carry the Ian Callum-designed Puma was, and still is today, a brilliant drive.

All Pumas were built in Cologne, but rust prevention wasn’t high on the agenda back then. The rust that mercilessly attacks these cars in the rear arches, door edges and sills means that Pumas rarely come up for consideration by Shed. In fact it’s been nearly five years since we last had one in here. That was a very clean, one-lady-owner Melina Blue 1.7 from 1998 with 75,000 miles and a full service history. Plenty of important consumables – cambelt, exhaust system, tyres, brakes – had been replaced in the year leading up to the 2017 PH ad, when it had a nearly new (and clean) MOT.

The price for all that Puma goodness in 2017? £650. Eeeh, them were the days. That blue 1.7 is still going strong in 2022 too. It has a clean current MOT, its rust issues having been sorted out in 2019. The low miles accumulated since 2017 suggest that the current owner is hoping to make a killing at some point in the future by applying the popular principle that any Ford will eventually be worth something if you wait long enough. He’s not alone in that either. A well-known ‘vehicles remaining’ website tells us that, although the number of Puma 1.7s has gone down year on year from 30,000 in 2011 to 1,800 in 2021, the number of 1.7s still registered in the UK but taken off the road for safe keeping has gone up year on year from 1,800 in 2011 to 3,800 in 2021.

Annoyingly, that website doesn’t give us any numbers for the 1.6, but it does tell us that there are only 140 or so 1.4s remaining, down from 3,100 ten years ago, so the figures for the 1.6 are not going to be huge. Pumas were only ever sold in Europe, and the production run only ran for four years. This particular example could be a decent one to ‘lay down’, if that’s the way you’re thinking, with its low 91,000 mileage and evidence of de-rusting work carried out in 2012, 2013, 2017 and 2019. You’d like to hope that in each case some decent rust prevention was slapped on.