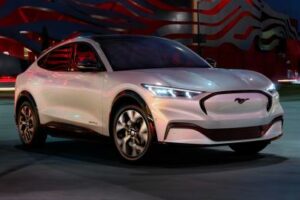 The Mach-E electric SUV will be sold alongside the Mustang GT in India.

Last week, Ford announced that it would no longer manufacture vehicles in India, sending shockwaves through the industry. However, the American carmaker isn’t completely exiting the market. It will continue to sell completely built units (CBUs).

Ford had earlier sold the Mustang in India as a CBU. The carmaker has now confirmed that the Mustang Mach-E electric SUV will be coming to India.

The Mustang Mach-E is a 5-seater all-electric crossover. It is offered in rear-wheel drive and all-wheel drive configurations and with the option of two battery packs. The 68 kWh battery has a claimed range of 370 km, while the 88 kWh battery pack is said to deliver up to 491 km of range (American EPA cycle).

The premium EV segment is slowly gaining momentum in India. At present, Mercedes-Benz offers the EQC, Jaguar sells the I-Pace, while Audi has its e-tron range. Tesla is also charting its entry into this space.