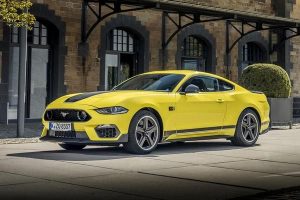 Ford says this is the best handling Mustang ever to reach the Old World; here's a closer look

"Suffice it to say we'd be very, very keen to see a Mustang like this offered in the UK" was how our original Mach 1 news story concluded back in June. It finished like that because, frankly, who wouldn't be enthused by the prospect of a Mustang GT with a little more track focus? That excitement was then ramped up further by confirmation in October that the Mach 1 would be offered for sale globally, and now we have this: the European debut, at Goodwood Speed Week of all places. Which virtually guarantees that it's coming to the UK.

There are some fresh details announced with the European debut, too. Ford is now saying that, for instance, peak power of 480hp is at 7,500rpm (rather than 7,000), thanks in part to the Open Air Induction System, intake manifold and 87mm throttle body from the Shelby GT350. The Mach 1 also receives ECU work as well as both port and direct fuel injection for a 'reward-to-rev character'. Additional reward should come courtesy for the new exhaust, with four 4.5-inch tips and an "unmistakeable" V8 sound.

Alongside the optional 10-speed auto, the standard six-speed manual for the Mach 1 is a Tremec 3160; in addition to the rev matching already mentioned, the gearbox will allow for flat upshifts. That's supported by a new twin-disc clutch to "comfortably manage aggressive, high-rpm gear-changes on track." So there's no excuse not to drive it hard on circuit, basically – because what else is a Mach 1 Mustang for?

Work to the front end – stiffer springs and anti-roll bars, a subframe and toe link parts from the Shelbys – is said to give this Mustang the sharpest steering of any yet offered in Europe. The suspension, including the MagneRide2 dampers, has also been specifically tuned with track driving in mind, alongside the aerodynamics. The release suggests that the Handling Package offered as an option to US buyers will be standard on cars for Europe, with all that's mentioned above fitted alongside a brake booster. Also standard for cars over here, if a little less exciting to hear about, will be Ford's Sync3 infotainment, a 12-speaker B&O sound system and the FordPass Connect modem.

Matthias Tonn, European chief programme engineer for this car, summed up our thoughts nicely when he said: "It's the most exciting Mustang in Europe to-date, and we are thrilled to be bringing the iconic Mach 1 name to Europe for the first time." All that's left to find out now is when it's coming to the UK and how much it's going to cost. Rest assured we'll bring you that information as soon as we have it.