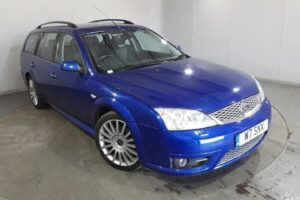 The humble performance estate is not the fast car staple it once was, and we all know why. Credit is due to Ford, then, for sticking with the idea – the current Focus ST estate is the best one yet, and a great alternative to the Cupra Leon if you don’t need four-wheel drive, but do want a manual gearbox. There are even silly colours available, for if you’ve been taken out of the lairy hot hatch, but the lairy hot hatch hasn’t been taken out of you…

Though inevitably less than iconic, there have been more than a few notable fast Ford wagons over the years. The Focus story actually began with an ST170 estate, a real curio that promises to be worth something in years to come through sheer rarity. Its lack of success meant there wasn’t a five-cylinder Focus ST estate (what a car that could have been), though the variant did make a torquesteering return with the Ecoboost engine in 2012. Add that to a canon which features various Sierras, Granadas, Scorpios and so on, and you get quite the Blue Oval back catalogue.

Arguably, though, it was the Mondeo where the fast Ford estate really came good. The ST200 had shown just what could be achieved, so the ante was upped for the Mk2’s ST220: the V6 was now 3.0-litres instead of 2.5, meaning 155mph was possible, and buyers were spoilt for choice with all three bodystyles again. We’ve never seen an ST220 four-door, but apparently they do exist…

Truth be told all versions were comparatively rare, because UK buyers preferred their 3.0-litre sports saloons with a German badge on them, however favourably reviewed the Mondeo was at the time. The estate is especially hard to come by nowadays, not least because an ST TDCI joined the Mondeo range just a couple of years after the V6. By keeping the look but boosting torque and reducing running costs, the oil burner proved much more popular.

This is definitely the ST220, however, and what an example it is. As a 2007 car it’s from right at the very end of Mondeo Mk2 production, and has covered less than 80,000 miles since then. Even more encouragingly, it’s been in the hands of just one owner (after some time as a Ford demo) for all those years, with 15 services to back that up. The selling dealer has acquired the Mondeo after it was traded in for something new elsewhere (presumably an old V6 Ford estate isn’t a good look next to rows of plug-in SUVs).

Looks superb to us, though. Yes, the pics are rubbish – at least wipe the pen off the window, guys – so it’s hard to make definitive judgements, but the Performance Blue paint still retains some lustre, and the wheels aren’t a mess. We’ve all seen worse looking 15-year-old Mondeos, that’s for certain. What can be seen of the interior is encouraging, too.

With all that in mind – this is a rare, critically acclaimed and seemingly cherished fast Ford, in the best colour – you would expect a price tag to be extortionate. We live in the world of the £150k Escort Cossie, don’t forget. But the Mondeo, still relatively young and without a motorsport connection, is many miles from that – this is up at £7,995. Even allowing for punchy running costs (less than 30mpg and more than 250g/km is really going to hurt right now), that looks like a lot of fast Ford for not very much. Even if most people will just assume it’s a diesel minicab…