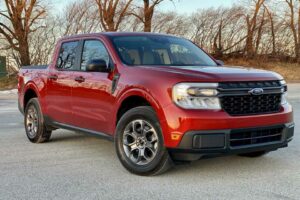 The new Ford Maverick hybrid pickup truck as well as hybrid and plug-in hybrid versions of the Ford Escape and Lincoln Corsair are being recalled for an increased risk of engine failure that could lead to an engine fire, the NHTSA disclosed Monday.

The recall concerns Ford’s 2.5-liter inline-4 hybrid powertrain. The engine can fail, and the oil from the engine block or oil pan can leak into the engine compartment. If fluids or vapors gather near a hot engine or, most likely, exhaust components, they could ignite a fire.

Ford estimates that only 1% of the recalled vehicle population is affected, yet it acknowledged 23 customer reports of under-hood fires globally. The reports cited engine smoke, melting under the hood, or engine fires. There were no known crashes or injuries.

An engine failure will make loud noises, such as metal-on-metal, Ford reported, and there will be a loss of engine torque. Smoke could appear from the engine area. There should be no mistaking if something is wrong. If a driver experiences an engine failure, Ford advises them to safely park the car and shut off the engine as soon as possible.

Owners will be advised to take their vehicles into a Ford or Lincoln service center, where technicians will drill extra holes in the shield under the engine, as well as modify the active grille shutters. The service will be completed at no cost to owners, who can expect to receive notification by mail of the recall action as early as Aug. 8. Reimbursement will be available for owners who paid to have the work done.