Ford has a mystery on its hands.

The company shared a handful of images of what it says are a mid-engine Mustang prototype from 1966, shot in-period inside one of its design studios. The car is based on a 1966 Mustang body, with a two-seat layout and a V-8 mounted behind the cabin. It’s basically a rolling shell, with no front fenders, bumpers, glass, or interior. The mystery? Ford says it doesn’t know anything about the car.

In a press release accompanying the images, Ford says it’s spent the last five years asking current and former employees that might’ve had a hand in the car’s creation where this thing came from, why it was built, and where it is now. Aside from the pictures, company doesn’t have any record of the car’s existence, and even the Mustang experts it talked to say they don’t have a clue what it is. 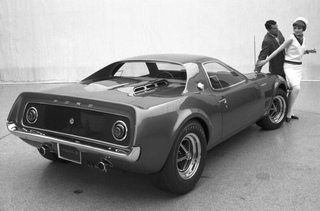 John Clor at Ford Performance initially suggested the car could’ve been the basis for the company’s 1967 Mach 2 prototype (above), a mid-engine, two-seat sports car with similar design cues. That was ruled out, however, when Clor discovered the Mach 2 was based on a Mustang from 1967, not 1966.

Out of options, Ford is turning to its fans in hopes someone will know something about this mystery mid-engine Mustang. It’s asking anyone with info to reach out to [email protected]. So if you know anything, let Ford know.