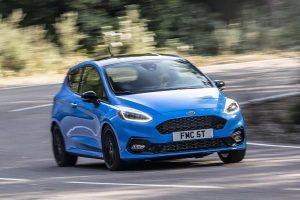 Perhaps more so than with any other type of car, the best hot hatches tend to be the uncomplicated ones. Obviously that applies to the classic Peugeots, VWs and Vauxhalls of this world, but also extends to the current day as well. The Honda Civic Type R is a true great, and yet still only available with a manual gearbox; the Up GTI weighs less than a tonne; and all those who've driven a BMW 128ti thus far speak of a better driving car than the M135i. The ti being the lighter, less powerful, less complicated BMW hot hatch…

Nothing extols the virtues of hot hatch simplicity better than the current Fiesta ST. Sure, the suspension uses advanced Tenneco RC1 dual-valved dampers, but they remain passive. Like the Civic, a manual gearbox is the only option. Even the drive modes, so often a bone of contention, are simple, and the car is great to drive without ever touching any button save the one that starts it. Beyond the Performance Pack, there isn't even much in the way of significant optional extras; everything is geared towards making the Fiesta ST accessible, simple, usable entertainment. Which is probably why it's so widely admired.

Ergo when it came to improving the car, Ford didn't attempt anything drastic. If the standard ST had a downside, it was probably a slight raggedness at the limit. Therefore a special edition addressed that with adjustable coilover suspension and lighter wheels, ideal for a more focused fast Fiesta. That car was the Performance Edition, 600 of them were made and it was brilliant.

This car, the Fiesta ST Edition, carries over the same Performance Edition upgrades. It differs from the old car in being Azura Blue instead of Deep Orange, and in being rarer: there were 600 of the Performance models, and there will be just 300 of these. They surely won't be around long; while orange has become a fast Ford colour (think five-cylinder Focus ST, Mustang and the run-out Focus RS Heritage) nothing resonates quite so well as a riotous Blue Oval flagship painted the colour of the badge. A Fiesta ST is already available in Performance Blue, but it looks a little limp against this vivid, attention grabbing Azura. It's easy to imagine prospective customers putting their name down just on the look, because it works so nicely – especially with the natty new wheels.

Inside the ST Edition is much like the standard car: the gear lever a little too low, wheel a little too big, seat a little too high. But there are good bits as well, with the Recaros that grab where they should, well-positioned pedals and decent instruments with – praise be – an easily viewable oil temperature gauge. So you know exactly when to go chasing 6,500rpm. For the Edition, the interior is jazzed up with additional blue stitching and carbon trim, plus a Sport button on the steering wheel. As found in the Focus ST, it gives immediate access to the mode probably used most, here obviously only adjusting throttle response, noise, steering and so on. Suspension alterations are going to take a little longer…

Having driven the new Edition on the same day as the Puma ST, it would be great to be able to tell you the differences between the two similar cars. But we're sworn to secrecy on the SUV until next month; while the Puma verdict is most likely the more interesting one, there's a little more Fiesta evangelising to do before we get there.

That's because, whether you've got into a Fiesta ST edition from a Ford Puma or from a Ferrari Roma, it's going to entertain. It's just one of those cars: vivacious, agile, up for a good time. A Fiesta is always small, light and direct, here it's hurried along by that tuneful and willing three-cylinder. There's nothing revolutionary about the experience but that doesn't matter, because it's a time honoured hot hatch recipe done very well.

Where the Edition improves upon the standard ST is right where you might expect: the handling. And although it'd be very easy to hunker down and firm up a Fiesta for ultimate track supremacy, that would rob the car of its mischievous side at road speed. The clever trick with this Edition car is that the fitment of coilovers has both retained the ST's scallyway sense of fun, and added a layer of additional finesse and sophistication to the way it drives.

So it's still mobile enough to be (amusingly) tweaked this way and that off the throttle, but earns its spurs (and justifies some of its premium) as you begin to drive harder. A track would surely show off its potential even more favourably, but the evidence of improvement is clear just from the road. The lower ride height means it turns even more keenly, for starters, changing direction like a housefly as the road winds out ahead. Where the standard car might just lose its composure the Edition is resolute, wheel and body control combining to ensure the Quaife limited-slip diff is delivering maximum traction and the driver given great confidence.

It all plays into the Fiesta's character perfectly, the rest of the package begging to be driven hard at every opportunity – and the suspension now there to lap up all possible punishment. That it does so while retaining admirable rolling refinement and comfort (also attributable to the slight unsprung weight saving of the wheels) is simply another in the long list of positives. It's a proper little riot. Don't be surprised if this coilover and wheel combo makes it to more Fiestas in due course – that Puma ST green would surely look great…

Moreover, while £27k looks a lot, it's easy to forget that Ford pricing is not always as simple as it seems. Because you're thinking a Fiesta ST is £19k; that was the launch price, after all. Well, not only does the range now start at the £22,275 ST-2, the Edition is based on an ST-3, and that'll set you back £25k. So another £2,000 for the suspension, the wheels, the paint (Performance Blue is normally £750 anyway) and the exclusivity on top of that doesn't seem too bad a deal at all. Some have already pointed to the Yaris GR's very enticing £30k entry point, and that shouldn't be ignored when the time comes to compare the Toyota. For now, however, we can just celebrate the fact that the Fiesta remains a fine hot hatch – one appreciably and amusingly improved with these Edition tweaks. If you're not one of the 300 people already on the waiting list, don't hang around much longer.