Ford F-Series Trucks: A Quick Visual Guide to All 14 Generations 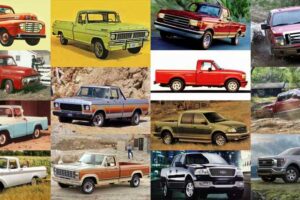 Despite how closely it resembles the previous-generation truck, Ford’s best-selling vehicle is all-new for 2021, making now a good time to take a look back at all the generations of the Ford F-Series trucks. And there are a lot of them. Of course, Ford made pickups long before the first F-Series debuted in 1948, but it was that first F-1 model that kicked off a long tradition that has seen trucks go from farm-working machines to family-mobiles.

Here are all the generations of F-Series trucks.

Even though Ford had produced pickup trucks aimed at private buyers before 1948, it was that year that the first F-Series debuted, developed after World War II to offer an extensive range of trucks for private and commercial customers alike. Known as the Ford Bonus-Built, the F-Series ranged from the small F-1 1/2 ton pickup and panel truck to the F-8 “Big Job” commercial truck. The chassis of the larger versions of the F-Series underpinned everything from fire trucks to buses, but it’s probably the small 1/2 ton that’s the most recognizable ancestor of today’s Ford pickup trucks.

The arrival of the second-gen F-Series pickup introduced a new front fascia, as well as the naming scheme that has endured for decades. This generation is best remembered for introducing a sleeker and more modern look, and for introducing of the Y-Block V8 that replaced the flathead engine. The F-100 name replaced the F-1 model in this new naming scheme, serving as the smallest model, while the F-250 replaced the F-2 and F-3 trucks introduced for 1948. The F-Series gained a few new items, including the option of an automatic transmission, while also becoming a little more car-like inside thanks to sun visors and armrests.

The debut of the third-gen Ford F-Series revised the look of the trucks once again, giving the cabin a more boxy appearance, while also introducing the forward tilt to the A-pillars—something that became a signature item for later generations and was an element on much larger Ford trucks. The hood gained a flatter, clamshell design, while the cabin became wider and more spacious inside. Underneath the skin, the third-gen F-Series gained four-wheel drive in 1958, even though third-party conversions had been around for a few years as niche items.

The fourth-gen F-Series continued with the square design theme, and the truck once again grew in width and in the number of creature comforts. This generation also introduced the unibody look, eliminating the gap between the cabin and the bed, which made assembly easier and cheaper for Ford. However, the automaker dropped this look in 1964, with the two-piece design returning. That same year a new frame debuted, one that would be used through the end of the 1970s. A four-door crew cab also debuted, arriving in 1965.

The fifth-gen F-Series debuted in 1967 with a wider, familiar shape that would remain a hallmark of F-Series for quite some time. The grille gained a more unified appearance, while the 302 Windsor V8 joined the menu in 1969. The four-door crew cab became a more popular option during this time, as well. But underneath the skin the platform was pretty much a carryover from the fourth-gen model—these generations simply moved too fast to require new platforms every five or six years.

The sixth-gen Ford F-Series largely tweaked the dimensions of the outgoing F-Series, introducing a new, two-tiered grille shape and a stripe that ran from the front side markers all the way to the back. But the engineering underneath was largely a carryover. 1975 saw the introduction of the F-150 nameplate, while the 1978 refresh gave the truck a significant makeover that included square headlights and a change to a single-piece grille design, without an upper level housing the side markers.

The F-Series redesign for 1980 marked a new look for the pickup, which was only hinted at during the 1970s. The new trucks were more square on the outside, featuring a new body, but perhaps even more important was the fact that the chassis was all-new for the first time in over a decade. Buyers now had a choice of five cab styles, and it now had some competition from below in the segment, as Ford introduced the Courier.

The eighth-gen model was largely a heavy facelift of the 1980 F-Series, but it sported a much more modern grille design that ditched sealed-beam headlights. The chassis and the cab stayed the same, while the truck gained some new tech, including rear ABS brakes. The eighth-gen model had a particularly short model year run, being a restyling of the previous model.

The ninth-gen model was yet another deep restyling of the 1980s model, and it gave the F-Series a sleeker, more modern look along with some new tech, while still relying on the carryover chassis and cab. This generation is perhaps best remembered for being the last of the square-body F-Series designs and for introducing a performance version dubbed the F-150 SVT Lightning that would preview future efforts to spice up the lineup.

The first truly new F-Series since 1980, the 10th-gen F-Series is also the first of the more or less “modern” F-Series trucks. This new F-Series represented a significant departure when it came to styling, featuring sleek and soft shapes, along with a new chassis design underneath. This was the first F-Series that sought to blur the line between the truck and the SUV, offering plenty of creature comforts already available in the Expedition and Navigator, while Lincoln also experimented with a luxurious F-150 of its own in the form of the Blackwood. The driving experience was also noticeably more carlike. Ford experienced tremendous growth in sales during this time.

The trends of greater interior comfort and a more forgiving ride and handling continued with the introduction of the 11th-generation F-Series in 2004. This time around the F-150 was noticeably larger and taller on the outside, sitting on an all-new platform. All versions of the cab now had four doors; regular-cab versions of the truck featured short rear doors for the small cargo compartment inside. The design of the F-150 became a little more chiseled, and its SUV-like interior comforts helped the F-150 become an easier purchase for those who used its cargo capacity only occasionally. This generation F-150 is best remembered for helping make trucks-as-personal-vehicles more of a mainstream concept.

This generation saw the F-150 grow in size once again, inching far closer to heavy-duty versions of the Ford truck lineup with a taller and larger cab, and locomotive-like front-end styling. While luxury trims grew once again with the introduction of the Platinum trim, this generation was marked by the adoption of more aggressive design and a greater inspiration from much bigger trucks, in what would become an arms race of sorts with the Ram 1500 and the Chevy Silverado. This generation also saw the debut of the off-road-focused Raptor variant, offering impressive suspension travel and plenty of grunt with a 411-hp V8.

The F-150 that debuted in 2015 saw some of the biggest changes to the popular model in years, including aluminum panels over a steel frame that saved the truck some 750 pounds of weight. The design, meanwhile, saw heavy-duty influence once again with a tall and blunt hood, a tall cabin and a locomotive-like front fascia. Plenty of new tech arrived with the 13th-generation model, helping turn the F-150 into more of a family-friendly vehicle. The Raptor returned as well, using its twin-turbocharged EcoBoost V6 with 510 hp on tap to dominate off-road performance, in a shot at Jeep.

The latest F-150 is an evolution for the truck rather than a revolution, once again relying on extensive use of aluminum to save weight while offering more tech inside, including the option of a widescreen infotainment system and a fully digital instrument cluster. Powertrain choices include a hybrid for the first time, while the true revolution is coming later, when Ford rolls out EV version later in the product cycle.