Ford Expedition, Lincoln Navigator recalled for fires under the glovebox 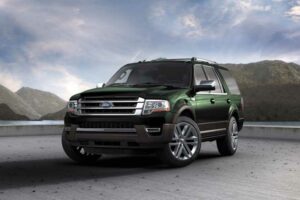 Ford is issuing another recall encompassing nearly 200,000 full-size SUVs. A defective motor blower can spark a fire originating from under the glovebox on the passenger side of the cabin, the automaker disclosed to the NHTSA this week.

The recall affects 198,482 Ford Expeditions and Lincoln Navigators from the 2015-2017 model years. The bulk of the recall population pertains to the Expedition, with 35,229 Navigators affected. The recalled vehicles were built between January 2014 and June 2017.

The blower motor, or fan, that sends heated or cooled air through the dash vents may be defective and could cause a fire in the cabin while the SUVs are running. Owners have complained of a malfunctioning blower, melted wiring harnesses, and fires under the dash. Ford acknowledged 25 fire allegations, with about half of the claims localized to the motor and the remaining 12 to more extensive damage inside the cabin, including to property damage and nearby vehicles.

Owners may notice an inoperative fan, a burning smell, or smoke issuing from the vents when the SUV is on. They’re asked to take their vehicles to a Ford or Lincoln dealer to have the blower motor replaced, and it may need to be replaced again later once the remedy part is available. There will be no charge to owners and reimbursement will be provided to owners who have had the work completed already.

This is the second time in as many months the Expedition and Navigator have been recalled for an increased fire risk. In July, Ford expanded the recall of its 2021 full-size SUVs for an electrical short in the cooling fan circuit that could cause an engine fire.

The current recall marks the third one issued this week by Ford, who leads all automakers with 52 recalls issued so far in 2022, according to Automotive News.

Owners can expect notification by mail of the blower motor recall as early as Sept. 12. For more information, contact Ford customer service at 1-866-436-7332 or visit Ford’s recall page.