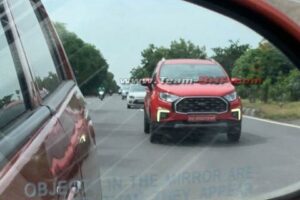 The updated EcoSport could be launched sometime this festive season.

The Ford EcoSport facelift has been spotted testing again, but this time, the test mule was seen without any camouflage.

The latest spy images reveal most of the exterior changes made to the crossover. The biggest change is the new front fascia which now gets a redesigned grille that looks more aggressive than before. The front bumper has been updated and features L-shaped LED daytime running lights. The car also gets new design alloy wheels.

The EcoSport facelift is likely to be offered with the same petrol and diesel engine options as the current model. The 1.5-litre, 3-cylinder petrol engine produces 120 BHP and 149 Nm of torque and is paired with a 5-speed manual or 6-speed automatic transmission. The updated 1.5-litre diesel engine makes 99 BHP and 215 Nm and is offered with a 5-speed manual gearbox.

The updated EcoSport could be launched sometime this festive season. Having said that, Ford is yet to announce the official launch date.

Thanks to BHPian vvijay for sharing these images with other enthusiasts!