Forbidden fruit | Six of the Best 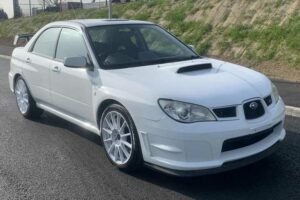 The GR Corolla is the latest fast car denied to the UK, but it's far from the first…

It seemed a dead cert. Following the rapturous response to the Yaris, the return of the Supra and the eagerness around the new 86, of course Toyota GR would sell the Corolla here. The UK is hot hatch heaven, after all. But it isn’t going to happen, not for the moment at least. Shame. Still, exciting performance cars denied to the UK is hardly a new phenomenon, so what better time to celebrate them than at the launch of another? Especially when somebody else has already gone to the hassle of importing them…

The Corolla excites us so much because it evokes the spirit of the revered old rally reps. Take one dull Japanese family car (and they come no duller than the Corolla), cram it full of turbo power and clever chassis tech, then stand well back and wait for the deposits. It seemed like that era was behind us, only for GR to bring it four-wheel drifting back into life. For UK customers, the Subaru Impreza was the ultimate in rally rep cool for 20 years; sorry Evo fans, but not selling the car officially here until VI made a difference.

The very best Imprezas were kept for the Japanese market. The best Subarus, in fact – think of the Legacy Spec B and Forester STI, too. As far as Imprezas go, they don’t get any more desirable than Spec Cs. Too hardcore for Britain (they said), the WRX STI Spec C Type RA-R was lighter, lower, stiffer and more powerful than an STI – it represented the ultimate evolution (no pun intended) of the Subaru saloon. So it was spectacular. As we’re expecting from the Corolla, the RA-R wasn’t a car to impress the neighbours with, but the drive was worth the disapproval. This one’s a stunner even by special edition Subaru standards – which the price reflects…

Yes, a Corvette. And no, not a new Corvette either – you might have heard (and be very excited) about the imminent right-hand drive ones. A 32-year-old, left-hand-drive Corvette, with some very dubious leather and a price tag of nearly £25k, in a Six of the Best list? Absolutely, because this isn’t any old C4 Corvette – it’s a ZR1. And that makes an enormous difference.

Until the new Z06, the ZR1 was the only Corvette without a pushrod V8. Its LT5 engine was designed by Lotus (when it was also part of GM), and the good folk of Hethel didn’t hold back: an all-aluminium 32-valve small-block V8, the 5.7-litre LT4 was good for 375hp and 370lb ft. A unique air management system improved efficiency, and the power secured it seven speed records in 1990, including 24 hours at an average of 175.885mph – a record that stood until the one-off VW W12 concept broke it 12 years later. Oh yeah, and Lotus did some work on the Bilstein suspension, too. The ZR1 really isn’t any old Corvette.

We could go on (this video tells the story of the ZR1 very well) but there are other cars to talk about. It’s more than worthy of inclusion here, put it that way. And this one is extra special, in Polo Green over Saddle leather and with the six-speed manual. Sold new to Tom Jumper Chevrolet in Atlanta, the Corvette has actually spent its whole life in the UK. So there are a few people over here who know what the fuss is about – time for one more to join the club.

In the last few years, we’ve come to see Ferraris with a boost gauge as the norm. But it wasn’t so back in the ’80s, even though in ’82 the Ferrari 126 C2 was doing the bizz on track in the hands of Gilles Villeneuve and Didier Pironi with a double helping of KKK turbos. Meanwhile, the 208 GTB had gone on sale in the Italian home market to take advantage of the tax break on cars below 2.0 litres – fitting cylinder sleeves that reduced the 308’s 2.9-litre Tipo V8 down to 2.0 litres more than halved the tax paid. But the 208 was still naturally aspirated, and with its tiny 66.8mm bores, produced just 155hp.

However, the tax issue centred on capacity, not power, which meant there was a loophole to be exploited – fitting a KKK K26 turbocharger that, in conjunction with Bosch K-Jetronic fuel injection, extracted 220hp at 7,000rpm from the little V8. This wasn’t far off the 240hp that the big-daddy 308 made, so the 208 GTB Turbo could accelerate from 0-60mph in 6.6 seconds and on to a top speed of 150mph. You can tell the Turbo apart from the naturally aspirated 208 and 308 by the NACA ducts in front of the rear wheels, at the bottom of the rear wings. It also has a split rear bumper, which made room for the central cooling vent at the rear, and the engine cover grille was extended farther towards the back of the car.

Otherwise, it is the same Pininfarina style you get with the 308 GTB, which means it’s achingly pretty from every angle. At a smidge under £55k, it’s not an expensive car compared with some examples of the 308 and, being rarer and the first-ever turbocharged road-going Ferrari, arguably more interesting, too.

Another mega muscle car from the US, the Camaro ZL1 was notable even in this current golden era for the American performance car. It had 650hp, it lapped the Nordschleife in under 7:30 and impressed pretty much everybody who got behind the wheel. For those who needed even more, a ZL1 package dropped that lap time to 7:16 (!) with Multimatic DSSV dampers, Goodyear Eagle F1 Supercar tyres, forged wheels and thinner rear glass. And it looked like this. So yeah, the UK did miss out on this Camaro.

Despite appearances, this one is ‘just’ a ZL1 rather than the maddest 1LE, borrowing the body kit from that car rather but nothing else. Still, that means more power than an M5 CS, and potentially a little extra with a ‘charger pulley upgrade. Plus the 10-speed auto and a chassis set up described as “good – really good” when PH drove it. The sixth-gen Camaro is a great looking Camaro, moreover, and if ever there was car that warranted a shouty spoiler, it’s the 200mph Chevy.

This 2018, 18k example is for sale at £85k, which isn’t small change to anyone. And no doubt it’ll feel gigantic in the UK, especially with the steering wheel on the left. But there isn’t another on PH, and you could pay an awful lot more for less power – and less circuit suitability – than a Camaro ZL1.

Obviously, a list of the best cars the UK missed out on had to feature an early Mustang. We didn’t get right-hand drive, S550-generation cars until almost 50 years after the original launch, so there were plenty not offered here. Yes, we did get the Capri (and everyone loves a Capri), plus a lot of Mustangs were crap. But some of them were great, which is why such a selection of classics reside on PH – if the car is good enough, people will find a way. Perhaps it’ll happen with the Corolla, too…

Anyway, this is the Mustang that really tickles our pickle today. It’s a Boss 302, and which overgrown child hasn’t wanted to drive a car called a Ford Mustang Boss 302? It was a homologation special, muscle-car style, built for just two years to make the racer eligible for Trans-Am. The Mustang wasn’t as fast as a Camaro, so in went a new small-block V8 (hence the name, with 302 cubic inches under there) as well as chassis tweaks to improve performance for the road car and track version. In 1970, a Boss 302 won the SCCA Trans-Am championship – job jobbed.

Imagine this in the UK 50 years ago, loud and proud and powerful as hell. If the Boss looks even better than expected that’s because this is a concours-winning example, subject to a four-year restoration and seldom driven since. Its engine has been rebuilt and the engine has been dynoed at exactly the same power as a GR Corolla, appropriately enough. There’s ‘four on the floor’, too, for those wanting to play Trans-Am racer in the UK. This particular one will set you back almost £100,000, which goes to show just how much the very best Mustangs can now command. And they’ll surely get no better than this.

If the rising price of everything ­is making you think about how far every pound stretches, can I suggest that in the excruciatingly overpriced classic car market, £19,000 for 5.5-metres of steel with 6.4-litres of V8 is about as stretchy as it gets. But it isn’t only how much you get that appeals here. Now look, I am very aware that many of you will be viewing this ’63 Cadillac DeVille four-door with a wee bit of sick dribbling from the corner of your mouth. Fair enough: one man’s meat is another man’s poison and all that. However, to me it is perfect. Well, apart from it not being the even more vulgar (and therefore way cooler) ’59 model with the biggest fins this side of a Blue Whale.

I simply love old lardy yanks, and the more extreme the better. Every time I see something like this Caddy I think about what we were driving around at the time – beige Morrises and frumpy Daimlers – and the contrast to what was available on the other side of the pond is stupefying. The fact that over in America every designer in Detroit was being fed LSD for lunch is a big tick in the box, but it’s not only the fins and massiveness of everything, it’s also the intricacies.

Look at the detail in the chrome grille and the similar attention levelled at the back end – the integration of the taillights, indicators and reversing lamps for instance. And I haven’t started on the interior yet, which provides just as much wow factor as well as the legion of clever features that were unheard of over here. I’ve always loved the idea of an old Caddy and I still do. A lot. And before anyone shouts about the cost of fuel, I wouldn’t need to drive this. I’m happy just looking at it. Does anyone else out there in PH Land agree, or am I completely alone here?