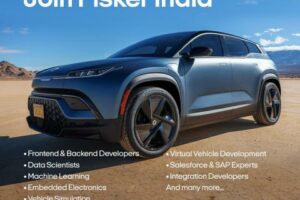 Fisker plans to introduce its ‘Ocean’ and ‘PEAR’ models in the country by 2024.

US-based EV maker Fisker has announced the setting up of its India headquarters in Hyderabad.

Fisker Vigyan, the company’s local subsidiary, has started building its team in Hyderabad. The company plans to hire 200 employees and the team is expected to be fully operational in the coming weeks.

Fisker has also partnered with Foxconn to manufacture EVs in India and plans to introduce its ‘Ocean’ and ‘PEAR’ models in the country by 2024.

The car is powered by a Nickel Manganese Cobalt battery offering 547 to over 563 km of range. The Sport trim uses a Lithium Iron Phosphate battery that has a claimed range of over 400 km on a single charge.