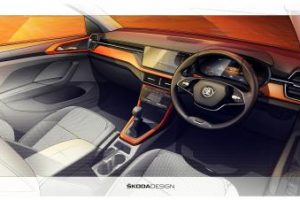 The dual-tone interior of the Kushaq looks clean and stylish.

Skoda has released digital renderings of the interior of the upcoming Kushaq crossover.

The images suggest that the Kushaq will get a dual-tone interior with orange trim on the dashboard and around the centre console. There are hexagonal air-conditioning vents on either side and overall, the cabin looks clean and stylish.

The car gets a sporty 2-spoke steering wheel, a free-standing 10-inch touchscreen infotainment display and a digital instrument cluster.

The Kushaq is based on the MQB A0 IN platform. Design sketches of the exterior have revealed a front fascia that’s typical of Skoda cars. At the rear, the crossover features L-shaped tail lamps. It has chunky bumpers with integrated skid plates, flared wheel arches, roof rails and a roof spoiler.

In India, the Kushaq will be offered with two turbo-petrol engines. These include a 1.0-litre TSI and a 1.5-litre TSI, while transmission options will include a 6-speed manual, 6-speed automatic and 7-speed DSG.

The Skoda Kushaq will be officially revealed on March 18, 2021.