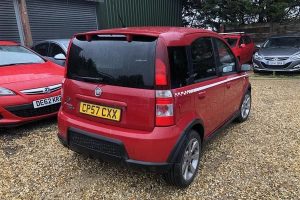 The peppy Panda is still available for a pittance; it can't stay that way forever…

Type 'red dwarf' into the browser of your choice and you'll have to fight your way through pages of BBC sitcom references before you get to the proper definition of a small, old and relatively cool star. No madam, not Keith Richards, we're talking heavenly bodies here and Keith would never claim to have one of them.

The Panda 100HP you're looking at here fits that astronomical definition. It's small, hot enough to bring a nice glow to your cheeks, and cool-ish, although the 'old' box that it is slowly ticking is perhaps dulling the appeal of these sparky, hard-riding zipabouts.

A couple of years ago we had a similar 57-reg 100HP Shed in red with peeling lacquer on the bonnet and a £975 price tag. Forum posters who were desperately trying to avoid buying it were bemoaning its cheapness. Shed can't remember the exact mileage but he does recall describing it as 'reasonable' and the MOT history suggests it would have been around 105,000.

Today's 100HP has 146,000 miles on it, which many might consider to be unreasonable, but these Pandas are tough little fellas, built to take the sort of abuse an angry Milanese teenager might dish out after a hot day shovelling pizzas. Cabin materials are not quite up to Bugatti standards but you won't notice that on B-roads because of the blurred vision. Rear bumpstops are famously too long on these, but bunging in some shorter ones from the Fiat Coupe goes a long way towards taking the piles out of 'piles of fun'.

This one started off on PH classifieds a few days ago at £1,150 and was then dropped a day later to a new price of £995. In August 2019 it passed the MOT with advisories for front lower ball joint wear and screen damage. In July this year it failed on that ball joint despite the car having accumulated zero miles in the year between the two tests. The suspension was sorted for the retake, leaving worn brake discs as the only current advisory. For info, a full set of EBC discs and pads will cost you around £250.

In his current ad the vendor reveals that the paperwork from his purchase is still going through and gave the car's size, or lack of it, as the reason for his buyer's remorse. He must be a big lad because these Pandas have very good space for such a small footprint, especially vertically. Some say you can fit two mountain bikes into one, although we're not sure how much disassembly and/or shoving would be required for that. Shed would have no bother there as he has plenty of experience of shoving large things into cars. It is true that 100HP brakes might be a touch over-assisted for some, and the seating position certainly won't suit everybody, although five minutes work with a Stanley knife will create a proper resting place for your clutch foot.

The 1.4 engine and six-speed 'box are both strong. Parts are cheap and they're surprisingly cheap to insure, too. Back in 2018 one PHer found that cover for our previous Panda 100HP would be £200 cheaper than that for a 1.25 Fiesta Style. Another PHer had one as a 'brilliant first car' that he took to 140,000 miles with no significant problems. He advised keeping the battery in good nick to avoid what might otherwise appear to be expensive warning lights such as for the electric power steering.

Taking a glass half empty approach on what may be to come, the other 100HP that we were talking about earlier (and that was bought by a PHer, hurray!) is still buzzing about the place, with although since we featured it in 2018 corrosion has started taking a hold on all the springs and the rear axle and the exhaust is beginning to crumble, which is very common on these.

Any other causes for concern, other than the quick pass-on and the slightly odd choice of what looks just like a used car lot for a private sale? Well, there's a shot of the engine bay in the ad showing a bulkhead that looks unfinished at best, or a different colour at worst, but Shed is fairly sure that all Pandas look like this. He's also fairly sure they didn't come out of the factory with an Abarth scorpion badge on the back or a dodgy white pinstripe down the side, but no doubt someone will come on here to confirm or deny any or all of that.

On the happy side, you're promised two keys and a comprehensive service history. If you're after a good station car this could the one that stops you going to the station in the first place.