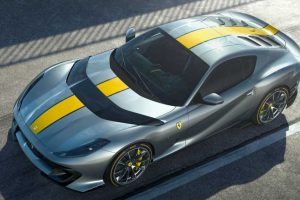 Take a minute and simply imagine what it must be like to wind this very special 812 Superfast limited edition’s 6.5-liter V-12 to nine thousand five hundred revolutions per minute on the way to enjoying its maximum output of 818 hp. Those are very big numbers, all of them, and how they inter-relate is important. People still chatter about the Honda S2000’s stratospheric 9,000-rpm redline, and that represented only the reciprocating mass of a 2.0-liter engine. This is more than three times the displacement, with larger pistons and such thrashing around to a higher redline. Oh, and with a specific output of 125 horsepower per liter.

And it’s a Ferrari. Nothing sounds like a naturally-aspirated Ferrari V-12. This is the most powerful, highest-revving naturally-aspirated Ferrari road car engine ever. And it makes a not-insignificant improvement on the “regular” 812 Superfast, already a superlative car that produces 30 fewer horsepower and revs to a (still wild) 9,000 rpm. We may be approaching the zenith of internal combustion tech, but Ferrari is not afraid to push the limits and produce some staggering numbers out of this classic 65-degree V-12.

If you’re wondering what’s responsible for the increased output and redline, Ferrari is being a bit vague at this point. Credit goes to a revised valve timing mechanism and new exhaust system—and other things beyond this that Ferrari will detail later.

That’s just the engine, and forgive us for geeking out about it at length before backing up to consider the rest of this very special 812. For one, what will this coupe be called? For inscrutable reasons known only to those in Modena, its name is being withheld until its May 5 reveal. Shrug, and move on. Also noteworthy is the light-weighting involved in this limited edition—and, in the tradition of modern supercars, that mostly involves a generous helping of carbon fiber inside and out.

Aerodynamics is another area of differentiation between this and the regular 812 Superfast. The brief here is “maximum downforce, damn the top speed numbers—or rear visibility, for that matter.” The rear glass is now a one-piece aluminum structure with vortex generators to help with airflow over the rear. It brings to mind the Lotus Exige, which famously adopted a downforce-aiding opaque engine cover, as well. Ferrari says many of the aero elements also have an intentional aesthetic component, such as the carbon fiber “blade” serving to shorten the hood’s apparent (and prodigious) length. Take that for what it’s worth.

On that note, we have no idea how much this special 812 will go for, but you can bet your bottom dollar it’ll exceed its underlying car’s $340,000-plus MSRP. Nor do we know how many Ferrari will make, although it will at least eclipse the one-off 812 Omologata. We’ll have to wait until May 5 to learn more.