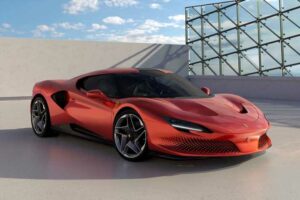 You’ll be familiar with the Prancing Horse’s One-Off series by now. The Special Projects programme has been around in one format or another for years, and, as the name suggests, it is tasked with the job of creating one-of-a-kind cars for supremely deep-pocketed customers. Sometimes these are revealed to the public, quite often they are not. In the case of the new SP48 Unica, we’ve been treated to a photographic peek – and that’s a good thing. Because from where we’re sitting the F8 Tribute-derived car passes the all-important eye candy test.

Mostly that’s because the ‘long-standing client’ (Ferrari very rarely puts a name to its commissions) has opted to do away with the F8’s rear screen. Granted, this denies passers by the pleasure of staring longingly at the 720hp V8, but Ferrari reckons it highlights the Unica’s ‘powerful muscularity’ and we’re inclined to agree. This being chiefly a product of the manufacturer’s Styling Centre, there is much talk of symmetry and intersecting lines, but it’s the reconfiguration of the F8’s extensive cooling requirements that signal just how much work has gone into the project.

The eagle-eyed will notice the air intakes set into the engine cover just before the rear wing, although the redesigned front bumper is said to be equally significant. Ditto the location of intercooler intakes immediately behind the slimmer side windows, which permitted a reduction in the size of the intakes on the flanks. The longer rear overhang is also claimed to reduce suction from the roof area, boosting rear downforce.

Ferrari hasn’t treated us to pictures of the cabin, although we’re willing to believe it looks the part coated in specially developed black laser-perforated Alcantara, not least because you apparently catch glimpses of an iridescent reddish-orange fabric underneath that matches the exterior colour. Elsewhere the new owner has apparently gone for matt carbon fibre trim and, in several places, a repeat of the hexagonal motif deployed in the new grille. The process of getting it all just right is said to take more than a year on average. Which, given the wait times currently quoted for any new car, seems fair enough for what you end up with.