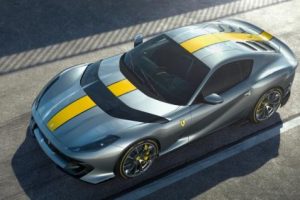 Ferrari has released images of a new special edition version of its 812 Superfast. The limited-run model will feature the brand’s most powerful naturally aspirated V12 engine till date.

Ferrari has unveiled the first official images of a special-edition version of its 812 Superfast. The new Ferrari 812 Superfast special edition model will have its world premiere on May 5, 2021.

Cosmetic updates on the new model include a carbon blade running across the width of the bonnet, a more aggressively designed front bumper and splitter, a lightweight aluminium panel replacing the glass at the back, a larger integrated spoiler, repositioned exhaust tips and a massive new diffuser. The interiors remain mostly unchanged, apart from the redesigned door panels which help reduce the overall weight.

The main update, however, is to the engine. The car features an updated version of the same 65-degree V12 engine, which now produces 818 BHP (a 30 BHP increase over the standard model). This makes its engine the most powerful naturally-aspirated unit on a road-going Ferrari supercar.

Ferrari is also said to have updated the valve timing mechanism, allowing the engine to now redline at 9,500 rpm. The Italian supercar brand has also offered the special edition 812 Superfast with a new performance exhaust system and updated side-slip control and rear-wheel steering.