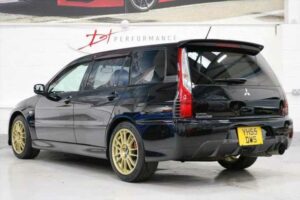 The collective fast estate fascination shouldn’t take much explaining by now. There’s practicality and performance in one package, usually an under-the-radar one that avoids unwanted attention; get it right and some will argue there really is no more compelling single-car option (says the BMW Touring owner). Add 4WD usability and a raised ride height into the mix and it’s easy to see why the super SUVs have been popular, too…

If there’s a problem with the fast estate, usually it’s one of weight. More space means more mass, typically dulling the acceleration and handling just a tad compared to the saloon it’s based on. Not always, and very seldom to the significant detriment of the package, but still noticeably. Opt for something smaller and lighter and stiffer and the inherent practicality of an estate package might be compromised. What you need, really, is a saloon car so rabidly aggressive that even a wagon conversion would barely take the edge off.

The Mitsubishi Evo IX wagon, much like the Nissan Stagea in fact, is one of those cars that’s a bit weird even by the standards of a JDM curio. Arriving almost 15 years after the first Evo – and long after its rallying days were over – the wagon packed almost all the Lancer’s clever chassis tech (keeping the diffs but losing the Active Yaw Control) into possibly one of the dorkiest estate bodies ever seen. Only the Skyline-engine Stagea, another car with an iconic powertrain in a much less famous body, could rival the Evo for ungainliness. An Impreza wagon looked like the most elegant of shooting brakes by comparison.

Though, of course, none of that mattered behind the wheel. Or, presumably, when loading a much more commodious boot. The wagon transformation added 70kg to the Evo IX’s kerbweight, but by all accounts every bit of the attitude was retained. Though meant to have 280hp just like any other Lancer Evolution of the era, the estate could still reach 60mph in less than five seconds. And that’s assuming, of course, that it really was just the 280hp…

Having waited so long to go the effort of an Evo wagon, it’s a surprised that Mitsubishi only ever commissioned a 2,500-car production run. Without ever being officially imported to the UK, finding one here is rare; finding one as good as this is another achievement entirely. Though now more than 15 years old and with the mileage approaching 90k, the Evo has clearly been doted on since coming to the UK in 2016. In fact the dealer suggests around £14,000 has been spent in that time keeping the car in fine fettle. Family-friendly body or otherwise, the wallet-wilting running costs of an Evo are most certainly retained – 4,500-mile service intervals included.

Still, the trade off is the awe inspiring drive will still be there too, especially in this car with the six-speed manual. Those that did get to drive a wagon in period raved about the experience, and there’s no reason to suggest the passage of time will have dulled the Evo thrill much at all. This one is still waiting for a few more ad details though there’s already much to be encouraged by, from the condition of the BBS wheels and Michelin tyres to the gleaming paintwork and smart Recaros. It’s yours for £30k, or double what a similar car would have cost in 2018, but then all the JDM legends have been soaring of late. There aren’t many that all the family can enjoy, though…