Home » Auto News » EV Regen: Why isn’t it possible to generate electricity when in motion?

EV Regen: Why isn’t it possible to generate electricity when in motion? 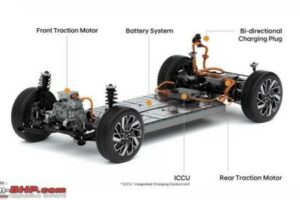 The idea of generating electricity while propelling the wheels would be like using an electric motor to power a dynamo which in turn, powers the motor back.

BHPian Palio_2005 recently shared this with other enthusiasts.

Pardon me for an absolute noob question. The question I had is, why is it not possible to generate electricity when the EV is in motion? Can’t the kinetic energy of the motion of wheels be converted to electricity and recharge the battery?

Here’s what BHPian torquecurve had to say on the matter:

It’s actually a good question that a lot of people do have. Of course, you can generate ‘some’ energy when you are just rolling along on a slightly downward sloped road, where your battery energy is not being used but the car is maintaining speed and the regeneration is happening. This however is a very low number, and you will not get the same energy you are putting in to climb the same slope.

However, if you are talking about regenerating while driving itself, then nope, it can’t happen as it goes against the basic law of Thermodynamics.

To achieve the kinetic energy of motion, you are using the potential energy of the battery. But the equation is not exact, meaning PE=/= KE. This is because there are energy losses in heat, friction, etc. For example, some PE is used to overcome the inertia of the tyre and the friction that is there between the tyre and the road, the same PE cannot be recovered.

So net-net, you will not be able to regenerate on the move – and overall, will not recover the energy you put in. In fact, this is why EVs use low rolling resistance tyres as it makes difference in the range.

Here’s what BHPian dhanushs had to say on the matter:

Well, the primary function of the electric motor is to propel the wheels (in the most efficient way) and not generate electricity. Regeneration makes sense only when used as an alternative to any other energy applied to the wheels. Like brakes.

So, the idea of generating electricity while propelling the wheels would be like using an electric motor to power a dynamo which in turn, powers the motor back.

Here’s what BHPian androdev had to say on the matter:

We are in the early days of EV technology. I am sure we will see more optimisations in the future (of course, to the extent that is permissible by thermodynamics and economics). ICE saw similar evolution involving fuel injection, water-cooled, higher compression, turbocharging, hybrid technology, etc.

The software will play a much bigger role in EV optimisation which would mean faster evolution compared to ICE. I don’t think regeneration would be the main focus compared to superior battery technology, more efficient motors/generators and algorithm improvements.

It’s the same electric machine that acts as both motor and generator – there is no problem with switching modes, just that there should be decent regeneration potential to harvest. Simultaneous propulsion and regeneration don’t have a strong case.

Here’s what BHPian arpanjha had to say on the matter:

Actually, for the sake of argument, it is possible to generate electricity while moving considering the basic concept of basic dynamo & alternator route. But as pointed out by @torquecurve there will be a net-net zero effect. Even if you set up a separate motor and battery unit to charge via the wheels, the car as a whole unit will end up using more than generating.

But you never know, the product development life cycle starts with wild ideas. Thanks for sharing this idea on this platform.