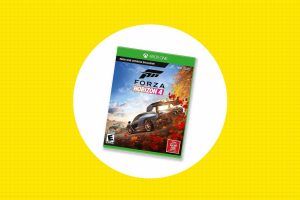 Lockdowns and quarantines highlighted the critical benefits of regular gaming on our mental health. These habit-forming time-sucks transported us to imaginary worlds when we couldn’t get out and experience the real one. Nothing was better than firing up the Xbox and power-sliding a Koenigsegg from the couch.

Whenever there’s downtime and nowhere important to be, car racing games are our go-to. Games released within the last couple years are taking full advantage of 4K, high-refresh-rate graphics that look immeasurably better than HD. Outfit a gamer PC and do anything possible to get an Xbox Series X or PlayStation 5 (an Xbox One or PS4 will still look great). Then, download or order copies of these addictive, super-immersive games.*

*Always ask your partner if racing games are right for you.

The best open-world car game, ever. Updated weekly with new challenges, Forza evolves with the car industry and invites the player to own homes, create races, and enjoy a near-infinite amount of roads and clever details that you’ll need a year of play to discover.

The Gran Turismo series cemented our love for JDM cars as a fiercely realistic driving simulator. It’s still among the best car games and an inexpensive choice before GT7 arrives in 2022.

This track-only sim is one of the few to be optimized for virtual reality headsets on a PC, and as such, you’ll find camera angles, shading, and textures so realistic you’ll swear you’re lapping Spa.

Released in 2010, this edition of the Need for Speed series was redone for 4K simply because it’s one of the most fun NFS games in the modern era. Police helicopters drop flaming barrels on your Porsche, need we say more?

This game lets you drive other vehicles, like boats and planes, to comic heights. Gameplay isn’t as tight or immersive as some of the other titles, but you’ll find a lot to love with the graphics and arcade-style stunts.

The official Formula 1 racing game is made by the same developers of Project Cars 3, which means it’s a hardcore sim that demands an analog controller over a keyboard.

Racing bikes shouldn’t be overlooked. This game includes 176 of them on 31 tracks and has an intense career mode.