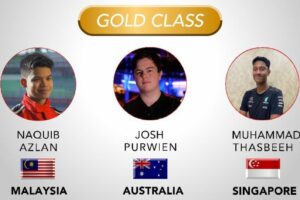 The fifth edition of the eRacing GP simulator racing series has concluded, with Naquib Azlan winning the championship in the Gold class.

Twenty-year-old Naquib scored 142 points in total, with Josh Purwien from Australia following in second place with 135 points, and Muhammad Thasbeeh of Singapore rounding out the top three in third with 109 points. Naquib started the final round from the back of the grid, making his way through the field in order to eventually finish seven points clear of closest rival Purwien by the end of the 10-race season.

The second race, held in reverse-grid format, initially saw Naquib languishing in eighth position as his closest title rival Purwien jumped into the lead. Naquib nonetheless managed to keep his cool and worked his way through the positions, finished third behind Purwien which was enough for him to clinch the title.

The Silver class for Edition 5 was won by Nur Shazliezhan from Singapore, followed by compatriots Muhammad Zihni and Ryan Keith in second and third places respectively. The Bronze class for this edition was won by Francis Angelo Gonzales of the Philippines, while Bernard Chan of Malaysia took home second place. Third place for the Bronze class was taken by Axel Mariano Nocom of the Philippines.

In the Copper class, the top spot was secured by Kelvin Pao of Malaysia, and was joined by Nico Sage of Malaysia and Kenneth Wong of Singapore in second and third places for the class, respectively. Meanwhile in the Teams Cup category, top honours went to Stratos Motorsports with 427 points collected through Ediition 5, followed by Tedco X Project Mu Racing with 328 points. Sim Racing Pilipinas rounded out the class with 268 points.

Global Edition 5 of the eRacing GP simulator racing series concludes with Malaysia emerging as winners of the Nations Cup with a total haul of 695 points for its second win in a row, followed by Singapore with 487 points and the Philippines in third place with 471 points.

“It has been a long time coming for Naquib, who has proven to be one of Malaysia’s best drivers, and not only in the simulator world,” said Alex Yoong, founder of Axle Sports which is the organiser for eRacing GP Global Edition. Naquib was recently signed by Toyota for their rookie racer programme, and has won both races in the Rookie class of the Vios Challenge for Season 4 of the Toyota Gazoo Racing Festival.