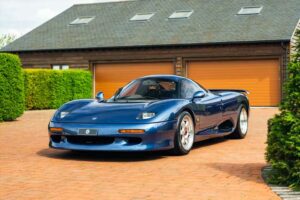 With only 27 road-legal cars ever made, the V12-powered XJR-15 is very nearly a myth…

Just imagine the excitement now. Fresh from a Le Mans victory, breaking a decade of Porsche dominance, Jaguar declares that a road-going version of its Le Mans-winning car will be built. You’d expect collectors and enthusiasts to be queuing around the block, chequebook in hand – especially with the kicker of a V12 engine.

Well, the XJR-15 was that car, but 30-odd years ago the interest wasn’t quite there. And V12s weren’t on their way out. The Jag itself was technologically advanced as well as historically significant, being the first road car to use a carbon tub and carbon panels, but Tom Walkinshaw’s idea of making an XJR-9 for the street didn’t immediately capture the imagination of the buying public. Or buying one per cent, rather – because each XJR-15 cost half a million quid.

That issue still seems bizarre. After all, you got a Peter Stevens design, a staggering V12, motorsport pedigree, manual gearbox, a central driving position, lightweight construction… the Jaguar sounds a lot like the McLaren F1 that came a couple of years later. And where that car was considered low volume with 64 road cars made (from a total build of 106), there were just 51 XJR-15s ever.

Of those, only 27 were for the road, the others race spec for possibly the greatest one-make series ever created: the Jaguar Intercontinental Challenge. Three races at three incredible tracks – Monaco, Silverstone, Spa – on Formula 1 weekend, a million-dollar prize, and drivers like Armin Hahne, Davy Jones and David Brabham. There isn’t much footage to be found nowadays, but the Intercontinental Challenge looks, if anything, even better than the prospect of a grid of XJR-15s sounds.

They certainly seem pretty hard work as well though, even by the standards of early ‘90s supercars (you’ll see most drivers on road wearing ear defenders), and that will have put some off. Factor in the 1992 recession, Jaguar’s own XJ220 with more power (the XJR-15 was built by Jaguar Sport when it was still a subsidiary) and then the glut of supercars that followed in the mid-1990s – EB110, F50, F1 – and perhaps it becomes easier to see why there weren’t more XJR-15s.

This one is chassis 021 of the 27 road cars made, completed in 1991 and sent to its first owner in Japan. Though slightly different in spec to the Intercontinental racers, it really was modifications to make the ’15 permissible for road use – treaded tyres, indicators, some ride height – that were added rather than any comfort-focused measures. It’s as raw as a 450hp, 1,050kg V12 supercar is ever going to get; 30 years ago that may well have been a tad overwhelming, but it sounds utterly exhilarating in a more modern and sanitised world.

The Jag was in East Asia for almost a quarter of a century, before being repatriated via an RM auction in 2014. It’s been in the UK ever since, with a change of ownership in 2017 and an extensive recommissioning at Forest Custom and Classics soon after. Which is not going to be a small job for a car this exotic. When the work involves replacing a fuel bladder you know it’s not an average recommission.

Moreover, it means this XJR-15 is match fit and ready to drive for whoever is courageous to take it on next. “Chassis number 021 is a beautifully original and, thanks to its recommissioning, a genuinely useable example of the Jaguar XJR-15, the first fully carbon-composite road car whose influence can be traced to the latest and greatest hypercars of today” reads the Girardo advert.

Of course, you’ll be paying latest hypercar money these days, as the world has woken up to the significance (and awesomeness) of the XJR-15. A 78-mile car sold for $1.9m at auction last year. With 1,370 miles on the odo of chassis 021, it ought to be less than that, but this is still going to be a seven-figure hypercar for anyone fortunate enough to apply about the price. Still, not an eight-figure hypercar like a McLaren F1 – and every billionaire has one of those…