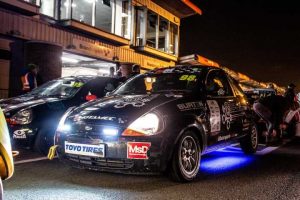 Like a phoenix from the ashes, PH is back for another year of grassroots motorsport

For most people, totaling your car at the final round of a season of motorsport would be a natural point to draw a line in the sand, and call it a day. Given that our car was essentially written off during qualifying before the race had even started, most people might even see that as a sign to give up and go home. I am like most people. Fortunately, the rest of the PistonHeads Racing Team are not.

Not only did we hammer our car out and beg and borrow enough parts to enable us to start the eight-hour race from the back of the grid, but we damn near won it and settled for second place. When we set out to compete in the inaugural season of Motorsport Vision Racing’s (or MSVR) budget endurance race series in 2019, we’d only planned to race that year and sell our car afterwards.

Yet, despite getting the taste of grassroots motorsport that we’d longed for and a number of podium finishes that were way beyond our expectations, we weren’t quite done. A race win escaped us more than once and we felt we owed it to ourselves to give it one more go. It also turned out that endurance racing with a group of mates in a Ford Ka is a heck of a lot of fun too.

Then COVID happened, races were cancelled, we denied ourselves a win at Brands Hatch through our own mistakes and our car was in pieces. Suddenly we were back to where we were at the end of 2019 with a decision to make on whether we continue for another season, only more like the start of 2019 with just a pile of car parts that we stripped off RF08 XWX. God rest her soul.

Having spent many months couped up indoors, coupled with the introduction of new Gaz coilovers and sticky Toyo R888R tyres for 2021 to pique our interest, we opted to push our chips back in. The 1st place carrot continues to dangle in front of us.

For the uninitiated, EnduroKA was a new budget endurance racing series started in 2019 by MSVR. The principle was simple; gather a group of mates, buy a cheap Ford Ka, bolt some bits to it and hack around a track with up to 49 other Kas. There are five endurance races in a season lasting between five and twelve hours and depending on race length, teams vary from two to six drivers with a mixed bag of first-time racers to Le Mans champions.

The series is tightly regulated with a small number of control parts and compulsory safety equipment that have to be fitted, to maintain a level playing field and keep costs down. You can build and maintain a car yourself, on a driveway with pretty basic tools, which has been our mantra since we started our journey. Other than fitting the roll cage, but we’ll cover that in our build article very soon.

Circuit racing in the UK is never going to be cheap, but by sharing the cost with your teammates, it’s considerably cheaper than going racing on your own. Seasoned racer RacingPete will also testify that it’s a hell of a lot more fun too, even if you have only got 70hp at your disposal.

The question we’re often asked, is how much does it cost to compete in budget racing? Our final cost for a full season of five endurance races and a round of 20-minute sprints for 2019 was £17,037, excluding personal costs such as getting a race licence and racewear (an investment if you don’t already have them). Break that down between five drivers that’s £3,407 each, which covers buying a car, insuring and taxing it, building it, race entry fees, running, breaking and fixing it.

Assuming the car is in one piece at the end of the year, they seem to be worth around £6,000, which should see you all getting a chunk of money back too. We’re expecting costs to be a bit higher this year with the introduction of coilovers and more costly stickier tyres, however the whole point of this setup is to reduce cost with tyres that should last longer and suspension that can be rebuilt rather than replaced, so watch this space.

The real reason we really wanted to continue though; is simply just how much fun it is. Building a car from scratch with a group of mates, working together to help each other improve and ensuring that you bring the car home for the next driver to step in (apart from Matt Dell), is what really makes this series so special. Not just that, but the camaraderie and the support from the rest of the paddock, as highlighted at our last race, is why we just can’t stay away. And if you struggle to comprehend how much of an adrenaline rush driving a Ford Ka can be, you have to try it to believe it.

Our first race at Donington Park is next week, our build is almost complete (more on that soon) and we can’t wait to get back on track for what will be an emotional final season competing in EnduroKa. Maybe.