Home » Auto News » E-scooters to be prohibited from use on KL roads from January 1, 2021 – police to fine users RM300 if caught – paultan.org

E-scooters to be prohibited from use on KL roads from January 1, 2021 – police to fine users RM300 if caught – paultan.org 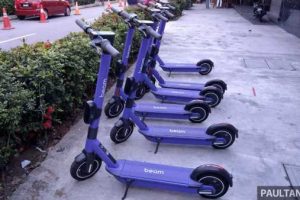 Electric scooters have become an increasingly common sight on the roads in Kuala Lumpur, but come January 1, 2021, all that is set to change. Authorities are putting a stop to their use on city streets, and users are set to face a fine if they do not comply, Bernama reports.

Rentals of these micro-mobility devices began earlier this year, and response to these machines, which allow pedestrians to quickly move from one place to another, has been growing. Now, KL police says that their use within city roads will no longer be permissible from next year.

Aside from a RM300 fine for the first offence, and a RM1,000 fine or three months jail for the second offence, the cops say that legal action can also be taken under the Road Transport Act against individuals caught riding e-scooters on the road from January 1. According to KL traffic enforcement and investigation department chief ACP Zulkefly Yahya, the police has received many complaints from the public over the use of e-scooters on the road. “E-scooters are not allowed to be used on the road, and it is a nuisance for other road users, besides being dangerous, as it could cause accidents,” he said.

“So far, the police have identified three areas in the city where the scooters are being actively used, namely around Dataran Merdeka, KLCC and Bukit Bintang,” he said, adding that at present, the police was only advising users to stop riding these devices.

Zulkefly said that e-scooters can only be ridden in gazetted areas such as playgrounds and permitted areas around shopping centres. He added that e-scooter riders will need to apply for a special permission licence from the director-general of the road transport department (JPJ) if they wished to use the vehicle on the road.