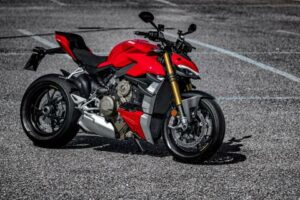 The Ducati Streetfighter V4 is the naked version of the Panigale V4.

Ducati has launched the Streetfighter V4 in India. The superbike is available in two variants V4 and V4S, priced at Rs. 19.99 lakh and Rs. 22.99 lakh (ex-showroom) respectively. Both variants come in a Ducati Red, while the V4S is also available in a Dark Stealth colour, which costs an additional Rs. 20,000.

The Ducati Streetfighter V4 is the naked version of the Panigale V4. It gets the MotoGP style biplane wings that are claimed to generate 28 kg of downforce at 270 km/h. The winglets are also said to improve stability during braking at the turn-in point and through the corner.