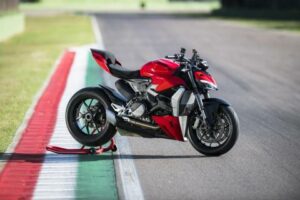 The Ducati Streetfighter V2 competes with the Triumph Street Twin, Kawasaki Z900 and the likes.

Ducati has launched the Streetfighter V2 in India, priced at Rs. 17.25 lakh (ex-showroom).

The Streetfighter V2 looks similar to the Streetfighter V4. It has V-shaped LED DRLs at the front, a wide handlebar, sculpted fuel tank, split seats, high-rise tail section, and a single-sided swingarm.

The bike is equipped with Showa BPF front forks and a Sachs monoshock at the rear. It comes with a host of electronic aids, including a 6-axis IMU, cornering ABS, traction control, wheelie control, engine brake control, ride modes, and a bi-directional quick-shifter.

The Ducati Streetfighter V2 competes with the Triumph Street Twin, Kawasaki Z900 and the likes.