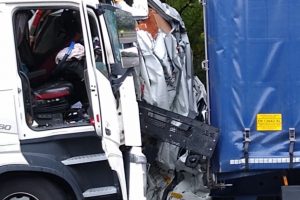 That mangled chunk of metal in the middle of the above image is – believe it or not – a van.

The vehicle was squashed between two lorries between junction 20 and 21 of the M1 motorway in Leicestershire on Friday morning, but incredibly, the van driver is said to have received “only very slight injuries”.

Leicestershire Police Specials, which tweeted the dramatic photo, noting that the very lucky driver “was told to get a lottery ticket”. It’s not clear what caused the bizarre wreck.

The northbound carriageway was closed following the incident, while the southbound lanes shut later when a gas canister was discovered by firefighters at the scene. The road wasn’t reopened until 3pm.