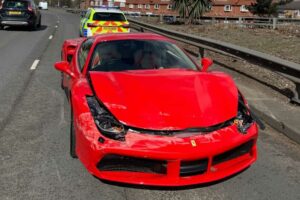 A Ferrari 488 is a beautiful thing, with a 661 hp twin-turbo V8 engine wrapped in a stunning mid-engined chassis. Of course, with that much power on tap, it’s easy to get into trouble if you’re not taking due caution out on the road. One British driver learned that to their detriment, having crashed their Ferrari mere minutes after purchase.

The news comes to us from the Derbyshire Roads Policing Unit, which posted photos of the aftermath of the crash on Twitter. According to police, the driver had driven less than 2 miles from the dealership after taking delivery of the Italian supercar. Derbyshire police were sure to highlight that the incident was no joke, despite the incident happening on the morning of April Fools Day, just before 11:00 AM British Summer Time (BST), as reported by BBC.

The damage indicates a relatively clean hit to the front of the car. Details are scarce, but zooming in on the published photos shows some damage and red paint present on the barrier, indicating that the Ferrari may have come to grief here. 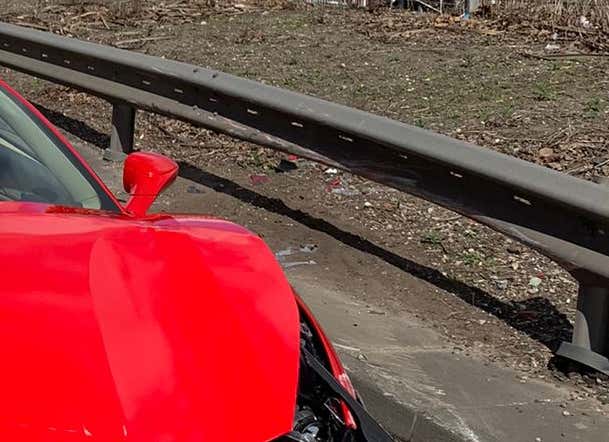 Scuffs of red paint can be seen on a damaged barrier next to the crashed car.

There are also scuffs on the curb, further supporting the idea that the Ferrari nosed into the barrier sideways, presumably during some exuberant driving. Police statements support this theory, noting that the driver was uninjured in the single-vehicle crash, with no other vehicles involved.

Buying a supercar can be a big milestone for some, and it’s all too easy to get swept up in the excitement of it all when getting behind the wheel for the first time. First drives can be particularly risky. When pent-up enthusiasm combines with a lack of skill and unfamiliarity with a new, powerful car, crashes are the typical result.

We can cite many examples, from a ruined Lamborghini Diablo to a comparatively-humble Toyota Supra that went straight into a tree during a test drive. Of course, we’ve also seen plenty of crashes from owners taking one last drive before selling their pride and joy, whether it’s a rare Acura Integra Type R or a tragically-uninsured Ferrari F40.

Thus, if you’re buying your first supercar, it pays to make your drive home from the dealership as boring as possible. Gently roll on the throttle, shift gently, and brake early if you want to get your new prized possession home in one piece. There’ll be plenty of time to mat the loud pedal once you’ve gotten comfortable in your new whip.