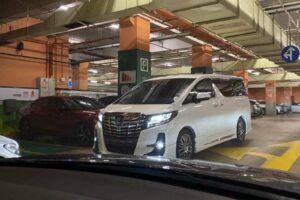 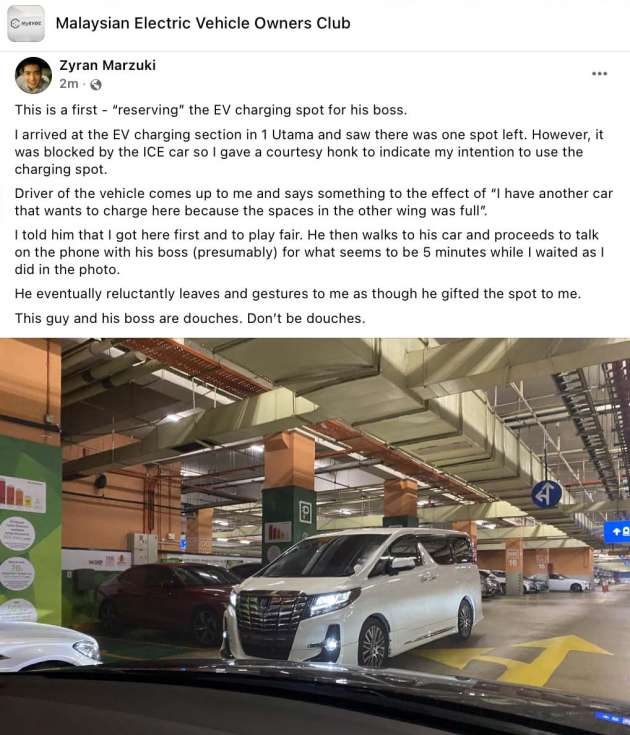 Electric vehicle (EV) chargers are a lot more common in shopping malls these days, and just like regular parking bays, it’s frowned upon to “chup” a spot for someone else. However, this was exactly the situation a Malaysian EV owner found himself in when he attempted to use a charging station in 1 Utama Shopping Centre recently.

Sharing his experience in the MyEVOC Facebook group, the EV owner said the one available slot he found was being blocked by an MPV upon his arrival. Giving a courtesy honk to indicate he would like to use the charging station, the MPV driver approached him and told him that there was “another car that wants to charge here because the spaces in the other wing was full”.

The EV owner responded by saying that this was unfair as he got to the charging bay first, to which the MPV driver returned to his vehicle to make a phone call (presumably to the owner of the other EV on its way) and eventually got a move on. Thankfully, no unwanted altercation resulted from the incident, which can’t be said of other cases where some irresponsible individuals attempted to “chup” slots.

Remember, using EV charging bays, which are typically based on existing parking bays, is first come, first serve, so practice proper etiquette and don’t “chup” them. However, there is an exception if the parking/charging provider offers a reservation feature like ParkEasy.

If you didn’t know, the Royal Malaysia Police (PDRM) has stated that “booking” a parking bay for another driver is illegal under Section 50 (3) of the Road Transport Act 1987, with those found guilty of the offence being liable to a maximum fine of RM2,000 or imprisonment up to six months. A second conviction doubles that – RM4,000 fine or 12 months jail term.

The rule states: “If any person, otherwise than with lawful authority, remains on any road or at any parking place for the purpose of importuning any other person in respect of the watching or cleaning of a motor vehicle, or for the purpose of directing any driver of a motor vehicle in respect of parking on such road or at such place, he shall be guilty of an offence.”