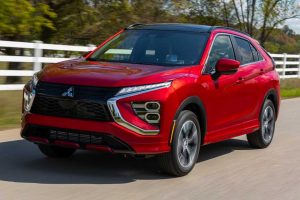 Mitsubishi is picking up speed. Not dramatically—think a brisk walk compared to its prior shamble—but the Japanese automaker is on a bit of a roll with its new products. We were duly impressed with the all-new, ground-up redesign of the 2022 Outlander, a three-row SUV that bodes well for the company’s direction. Conversely, the Outlander drive program also slotted us behind the wheel of the refreshed 2022 Mitsubishi Eclipse Cross, a compact SUV that reminds us the brand still has work to do.

That’s not to say the 2022 Mitsubishi Eclipse Cross is a bad compact crossover. But the old—and new—Eclipse Cross isn’t at the top of our list of favorite small SUVs. The refreshed model somewhat relegates the old version to memory, but it’s still anchored by a dated interior and lackluster powertrain.

There’s some good, too. After skipping the 2021 model year, the Eclipse Cross returns with Mitsubishi having fixed the prior model’s most glaring visual wart: The rear tailgate ditches the controversial fixed light bar that ran across the rear window and gave the old SUV’s back end a rather ungainly stepped look. The new conventional tailgate is easier on the eyes and easier to see out of, a smoothed design complimenting the slightly revised front fascia featuring new darkened trim.

More butt, more space. Mitsubishi added 5.5 inches to the Eclipse Cross’s total length via the new front and rear bumpers, equating to a 0.8 cubic-foot bump in cargo capacity behind the second row, and a 1.2-cube boost with the row folded, for totals of 23.4 and 50.1, respectively. Interestingly, Mitsubishi says bulky and unwieldy items should fit better thanks to an 11-percent increase in floor area.

Buyers now have the choice of new contrasting gray upholstery, as opposed to the old model’s black-only cabin. The standard 7.0-inch and optional 8.0-inch infotainment screens aren’t new but are positioned closer to the driver. They ditch the cumbersome touchpad controls on the center console for complete touchscreen operation and a set of traditional volume and tuning knobs.

Mechanically, everything is untouched aside from a moderately reworked suspension setup. Larger shock shafts are present, and bounce/rebound settings are modified to work in conjunction with a more rigid rear cross-member piece. This is all little stuff, but a wallowy, uncontrolled ride was one of the older Eclipse Cross’s biggest letdowns.

Hey, Haven’t We Seen You Before?

Power still comes from a turbocharged 1.5-liter four-cylinder engine, good for 152 horsepower and 184 lb-ft of torque sent through a CVT in either front- or all-wheel-drive configurations. Not bad for a segment that is almost exclusively populated by low-output naturally aspirated engines, especially regarding the Toyota CH-R and the Honda HR-V.  Around the wide, flat streets of urban Orange County, California, this was more than enough to buzz around with. Our derriere dyno pegs the 0-60-mph run somewhere in the mid-8-second range; it’s nothing special but adequate for at-speed highway merges and careful passes.

The Eclipse Cross didn’t wheeze and keel over when confronted with significant hills; engine thrash was the biggest problem. As we mentioned in our 2022 Outlander drive, the combination of a CVT and a small, loud engine is a recipe for ear-thrumming noise, vibration, and harshness when you put your foot down.

Handling wasn’t ideal, either. There’s a distinct lack of ride composure even when taking sharper corners at low speeds, but not so much to make it significantly worse than the competition; cars like the Toyota CH-R and Subaru CrossTrek aren’t exactly hot-hatches, but their neutral handling retains at least some of the good dynamic traits from their compact car source material. Conversely, ride quality in the Mitsubishi is relatively cushy and well-isolated, admirably soaking up crags and crevasses on surface streets.

Our loaded SEL model (with range-topping Touring package) was a pleasant enough place to spend time in, though Mitsubishi will be wise to make sure its future ground-up redesigns follow the same path as the new Outlander. There’s nothing glaringly wrong with the Eclipse Cross’s interior, but nothing stands out. Our top-of-the-line model featured requisite niceties like heated seats, dual-zone climate control, and Android Auto/Apple CarPlay. For the most part, it’s a no-fuss get-the-job-done cabin to commute in, with plenty of plastic trim in a variety of piano black, textured, and faux-metal appliques.

Nothing has changed in the backseat accoutrements or the variety of available active safety systems, either. Aside from awkward ingress and egress due to the new Eclipse Cross’s aggressive roofline, there’s a surprising amount of legroom, even behind my seating position adjusted for my 5-foot, 11-inch height. While rear passengers stretch their legs, their rumps will be toasty with available heated seats. As for safety systems, Mitsubishi offers a relatively comprehensive package with blind-spot monitoring, lane-change assist, rear cross-traffic alert, automatic high beams, and forward collision mitigation.

Overall, there’s nothing special or especially notable about the Eclipse Cross, but it’s a compact crossover that starts at a low $24,590 and maxes out at the $34,670 waterline. If you liked the outgoing Eclipse Cross, the new version should be right up your alley, and if not, it’s worth checking out for its new features and relatively budget pricing. With the new Outlander being the real story right now when it comes to Mitsubishi products, we’re interested to see how and if the company continues to improve across the board as it moves deeper into the new decade.