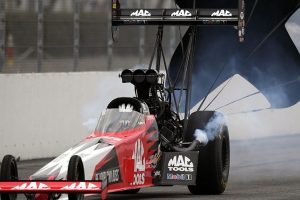 Speed came easily to Doug Kalitta. How could it not? As the nephew of drag racing pioneer Connie Kalitta and the cousin of two-time NHRA Camping World Drag Racing Series champion Scott Kalitta, the hook was set early, both in racing and aviation.

At 21, Kalitta was one of the youngest pilots ever to get a license to fly Learjets. And he’s gone on to log more than 10,000 hours of flight time, much of it flying freight around the world for Connie’s company, formerly called American International Airways, which grew from Connie delivering auto parts to the manufacturers around Detroit, flying his own twin-engine Cessna 310.

AIA, now called Kalitta Air after a dismal merger with Kitty Hawk Airways failed after three years in 2000, has a fleet of 37 airplanes, including 24 Boeing 747s. Doug didn’t spend a lot of time in the 747s–they were the ultra-long-range aircraft, and he was afraid he’d get stuck in China or India “and I wouldn’t be able to get back here in time for a race.”

As the Bounty Hunter, Connie Kalitta, now 83, remains the head tuner for the all three cars, including Shawn Langdon’s Top Fueler, but mostly for the yellow DHL Funny Car driven by J.R. Todd. “We built my uncle a little apartment in that trailer so he doesn’t have to worry about dealing with a motor home or hotel. We call it the Connie Hilton,” Doug said.

Oddly, Doug’s path to professional motorsports didn’t follow a straight line, but traveled in an oval—he was a USAC sprint car and midget champion. Then as now, it was always interesting to watch the tall, lanky Kalitta fold himself into something as small as a midget, but he was a threat everywhere he went, despite the presence of short-track superstars like Tony Stewart, Ryan Newman and Dave Darland.

Then as now, Kalitta is a quiet, unassuming guy who does his talking on the race track. He was happy racing in USAC, but when things started going bad after the Kitty Hawk merger, “They looked around and said, ‘What’s all this sprint car stuff doing here?’” As it happened Uncle Connie had an opening for a driver at Kalitta Motorsports, and a drag racer was born. “If was a great opportunity,” Doug said. “As long as I’m racing something.”

About that time, Doug took over a small portion of Connie’s aviation responsibilities, creating Kalitta Charters, which he owns. He now has 36 airplanes, ranging from 13 Boeing 737s to 11 Learjets which fly everything from regular freight to air ambulance runs. He also signed a deal in 2007 with the federal government to bring fallen military heroes home—prior to that, their remains were often just added to the cargo of passenger jets, and dropped off wherever the plane landed. Now, Kalitta takes them to the closest airport to home, and does it with a “degree of respect that they deserve, that they weren’t getting before.”

As for his drag racing: Kalitta has dominated the NHRA Top Fuel season, but a late run by current champion Steve Torrence has Kalitta 51 points behind Torrence, 764-713 for the Mac Tools dragster.

“We have two races left and we know what we need to do.”

“We have two races left and we know what we need to do,” said Kalitta. “The good news is we basically control our own destiny. If we run well in qualifying and win these last two races we should be the champions. It will be tough but I have a great team behind me and I have a lot of confidence. I just try to do the best I can up there and keep the win light on.” He’d love to win in Houston this weekend—it’d be his 50th victory.

As for the NHRA, and the challenges it has faced during the coronavirus pandemic: “I think it’s all about getting through this year and making a fresh start,” he said. “Just get this year over with.”

Kalitta and his wife, Josie, have a son, Mitchell, and a daughter, Avery, who is about to start college. Any future Kalittas on the starting line? “Right now, I don’t know,” Doug said. “They’re more interested in soccer. But if either one showed any interest, we’d make something happen.”

Doug Kalitta is the winningest NHRA driver without a championship. Are you rooting for him this weekend at Houston at he sits just 51 points behind two-time Top Fuel champion Steve Torrence? Jump into the comments below.