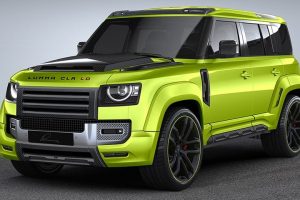 It has been crafted for the soon-to-be-announced top-spec Defender, which should have either a five-liter supercharged V8 or BMW‘s twin-turbo 4.4-liter V8. LUMMA Design states that “Powerful performance enhancements and exhaust systems with a sports sound are already being tested,” and that all of the upgrades should be ready for spring 2021.

For now, we have been treated to a closer look at what to expect from LUMMA Design. A widebody kit increases the Defender’s width by around 40mm, and upgrades all around give the SUV much more stance and aggression. At the front, you can find a LUMMA CLR LD-branded fascia sporting a carbon fiber grille and a new bumper, as well as a new hood that is fitted with an oversized carbon fiber power hump.

A roof panel with integrated spotlights, carbon fiber trims on the side vents, side mirrors, and door sills, as well as a new rear end with a bespoke quad tailpipe set-up, also all appear on the kit. Rounding out the list of upgrades is a selection of rims that range from 19 to 23 inches, and can be fitted with or without off-roading tires.

Take a look at the LUMMA Design LUMMA CLR LD in the gallery above, and expect the Land Rover Defender upgrades to be fully revealed in spring next year.