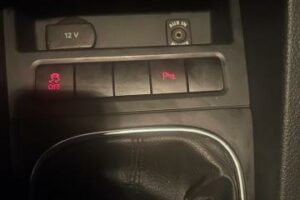 The retrofit is pretty straightforward and a good weekend project.

BHPian prerak.kataria recently shared this with other enthusiasts.

Hey, It’s Prerak, in this post, I am showcasing the process of installing an ASR Off button in the MK6 Jetta, I installed this in my friend’s car (@das_mk6_jetta on Instagram).

This Post will not be an in-depth guide into how it is installed but just a showcase of this retrofit and some highlights of the process which is pretty straightforward and a good weekend project.

What is the purpose of this extra button?

ASR stands for Anti Slip Regulation, it is another way of referring to Traction Control, but because the MK6 Jettas’s cluster reads it as ‘ASR’ i will be referring to it as ASR throughout this post. But, to my knowledge, they serve the same purpose, which is to limit traction loss in any circumstance.

This means your vehicle cuts power anytime one or more wheels spin faster than others, this could be annoying while enthusiastic driving and especially during launches.
To ask your ABS to ignore this, we require this ASR Off Button.

This Retrofit requires your vehicle to have ESP, I was not 100% sure if this Jetta had ESP, cornering lamps indicated that it did, which would mean it has a steering angle sensor, usually, it is coupled with ESP and it also warned for traction loss in the cluster.

Just to be sure I hopped into 03-ABS Brakes in VCDS and under advanced measured values, opened ABS/ESP and they were toggling between On and Off confirming it had ESP.

Further, we require the ASR Off button kit.

This kit is very straightforward, One wire(the yellow one) to the ABS Module, the rest of the wiring just takes ‘Power’ and ‘Illumination’ from the 12v socket located nearby. The entire procedure is plug and play.

With the placement of the button taken care of, you need to route the ABS signal wire out of the firewall and into the ABS Pump connector.

For Right-hand drive Manual vehicles, the grommet is in the passenger side and the wire needs to route out of the passenger footwell. (Easier said than done, I would think thrice before doing it next time)

You can route the ABS Signal wire through one of these nipples and wire it into Slot #8 of the ABS Pump Connector.

That pretty much sums up the installation if you have a Pre 2014 VW Jetta, Post Facelift cars would require coding through VCDS but this car being a pre-facelift 2013 Jetta did not require coding

Along with it is the PDF Guide they have for this retrofit, which is the very reason I am not going in-depth with this one.

Different kits have different ways to take power, my kit was entirely plugged and play and did not require any of this wiretapping work. My kit just needed a connector from a 12v socket from where it took power and illumination.

(Side note: Even though this Jetta did not have an illuminated 12v socket, there was an illumination signal provided in the connector that powered the 12v socket, perhaps a cost-cutting measure and a prospective retrofit?)

With the installation complete. it was time to test its working, with a rather huge hiccup along the way which was sorted, the ASR Off button could be tested, here it is in action.

Excuse the low quality, this was taken right after the vehicle was fixed and I could finally test the button, with so much excitement I just whipped my phone out and took this quick clip.

Holding the ASR Off button deactivates the ASR, and holding the same button again reactivates it. A sign pops up in the cluster and even the MID warns and notifies you about it.

What was the hiccup?

Now, this is the reason I sat down to type this post. During the installation of this button, the signal wire which needed to be run to the ABS Pump had to be crammed through a grommet with at least 20 (even more) wires.

In the back of my head, I was scared about puncturing one of them, even after taking precautions things go wrong. We took our time with the installation but still managed to mess up at the step I was worried about.

While routing out the signal wire, we definitely messed something up, Because we were greeted with these Lights.

“I removed the battery, these faults are bound to come up”

Never in my life have I wished for a blown fuse, but at this time I was hoping from all of my heart it would be a blown fuse.

But all the fuses checked out.

One entire day of checking reachable connectors did nothing either, took it to my local FNG

“It needs a new steering rack”

I was not convinced at all, I was sure it was some small wiring puncture.

I persuaded them to check the connections from the Rack and focus on wiring more than the rack.

After a few days of digging around (they could not work on it all the time, we would only tinker around in my presence) we found out the wire for CAN Low was ripped at some point in the harness. Under no-load, there is a potential difference of 5v between CAN high and Low, under load, it is 3v (Please correct me if I am wrong, I am not sure of loaded/Unloaded conditions, but sure of the values)

But the steering rack connector would not read continuity for CAN Low and Showed no potential difference either.

So we took apart the harness further and found the cut, it was under the grommet, away from the place I expected any cuts or damage, I thought it would cause problems right at the cut of the firewall, anyway, the cut was fixed with a length of OEM CAN Low wiring (did not wish to put any other colour over there, would prevent any confusions for future mechanics) Steering angle sensor-activated again through VCDS and calibrated as well.

ESP, CAN and ECU were pretty happy after this cut was sorted out, took the better part of a week to locate. I was relieved to have those errors cleared out, it took a huge toll on my confidence with working on cars, however. It made me ever so grateful to own an automatic which has a Huge grommet which lets us route anything through the firewall, this retrofit has made me develop a fear of working on Manual cars if it involves going through the firewall.

If any of you wish to do this retrofit, be a million times more careful, I know I will be next time.

But what did we learn:

I learnt a lot about the technicalities and working of the ABS Pump and Steering Rack, especially the steering angle sensor, I understood ESP slightly better, these are salient features we overlook while purchasing a vehicle, even though newer vehicles come with such features as standard, but not all Manual vehicles do.

I learnt how to diagnose better, even though no two cases are the same, but still, after digging into the car for a week I got to know where to look at and what to check under certain circumstances.

I learnt how important patience is, even though we took our time with this one, maybe there was room for more patience, more care.

Unexpected things happen, this cut, under the harness, even after being patient and careful at every step took things with this retrofit in an entirely new direction.

But after all of that, My friend was happy with a functioning ASR Off Button, they enjoyed their launches much better and loved the screeching of tyres without the car being limited by its safety feature.

Most of all, they were happy their car got a genuine retrofit done, they had been helping and assisting me with my retrofits all of this time, even while purchasing their car they mentioned they are looking forward to all the technical retrofits we were gonna do to this car.

Much more would come to this car for sure if it stays under their ownership and my proximity, they change cars frequently so I can’t promise anything. Anyhow, I hope you liked this showcase of the ASR Off Button and my experience while installing it.