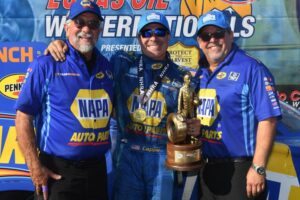 NHRA Funny Car points leader Ron Capps knows that drag racing is more than physical, that much of it is mental. But sometimes it also is sentimental.

As he prepares for his chance to clinch a second championship at this weekend Auto Club Finals at California’s Auto Club Raceway at Pomona, Capps’ mind has been on relationships and the effect they have on his on-track performance.

He has had a sizeable list of celebrated crew chiefs and said he was “devastated” this time last year when tuner Rahn Tobler decided to retire. But team owner Don Schumacher placed him in the hands of co-crew chiefs John Medlen and Dean “Guido” Antonelli, and together they are in position to give the NAPA Dodge driver his second championship—if they can fend off three-time and reigning champion Matt Hagan and veteran two-time champ Cruz Pedregon. 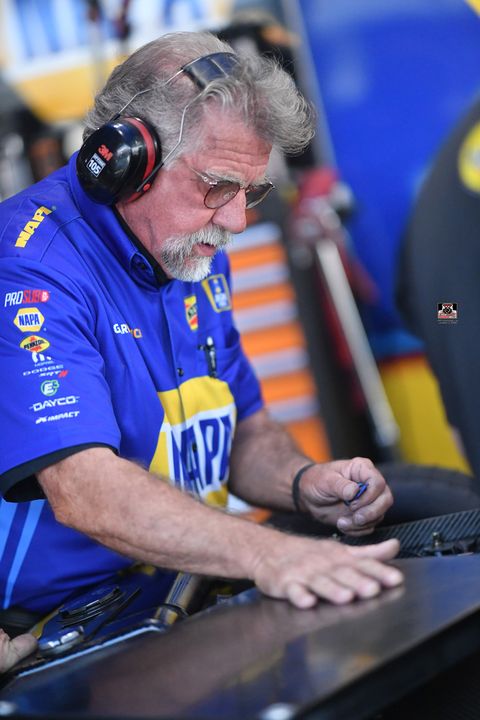 “This year has been unique, because Guido and I have been friends for so long and we finally get to work together,” he said. “We met my rookie year [when Capps was competing in a Top Fuel dragster]. I was driving the rig, driving the race car, working on it, and he was a crew member of John Force’s. He took me under his wing back there on the road and taught us some of the cool places to go, little things like where to take your dry cleaning in between races, where to work on the car, things like that.

“Guido and Medlen and our NAPA AutoCare team, we came together quickly like a duck to water at the beginning of the season, and it just felt like a natural fit,” Capps said. “Our last race in Vegas was a perfect example of how well we all work together, because, as much pressure as there was on race day, especially with all of the other top Countdown cars going out early, they really knew how to loosen me up and keep me in the right frame of mind. They’ve certainly helped me and my driving throughout the year. The big key for us this weekend is just to continue what we’ve been doing.

“I feel good going into this weekend. No throwing up,” he said, referring, slightly chagrined, to past years when he was so stressed that he vomited into garbage cans at the racetrack. “I’ve had such a great race car – that’s all team, that’s all car, not driver. And I’ve been really proud of these kids on this team and grateful that we got put together this year.

“There’s a lot going on in the off-season,” he said, “and it’d be really cool for us together to be able to close the deal. I’ve been in this position a bunch of times before we won in 2016. And that year we didn’t win one race in the Countdown. But we were consistent, and we put pressure on a lot of teams.” 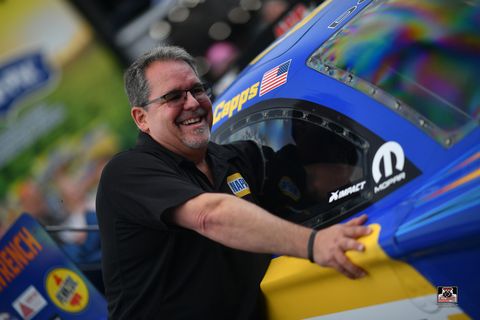 “I’ve never won the Finals. I’ve won the Winternationals [also at Pomona] four times but never the Finals. Guido himself has had pretty good success at this race.”

At the most recent race, at Las Vegas two weeks ago, Capps’ closest competitors – John Force, JR Todd, and Matt Hagan—all dropped out in straight pairings in the first round while Capps advanced to the final against Cruz Pedregon. And when Capps won his first-round match-up, Antonelli was emotional.

Antonelli told Autoweek why: “It was an emotional 20 minutes watching it unfold. Our team works so hard and so many hours to prepare the car and the parts for the services between runs and days at the shop. (Myself and Medlen have developed procedures over the years because of racing life lessons from failures of items [so] the services are longer than some teams’.

“When the round was unfolding pair after pair, I couldn’t believe the opportunity that set for us. I never doubted that we could win the championship before first round, but with the quality of the cars in front of us [on the racetrack] and on our heels [in the standings], that even if we won the last two events, we would need some help from the opponents.”

What he received, he said, was divine intervention—from the late Eric Medlen, John Medlen’s son who died in 2007 from injuries sustained in a testing crash when the three of them all worked for John Force Racing.

“I could not help but think that Eric was looking over us,” Antonelli said. “Medlen and I talked about the opportunity after the final, and both agreed that we had help from Eric.”