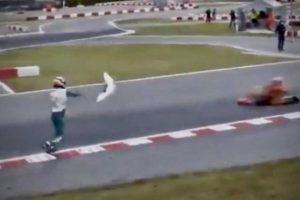 Appalling stupidity and recklessness were on display today at the final round of the FIA World Karting Championship held at the South Garda Karting Circuit in Lonato, Italy. Italian racing driver Luca Corberi was caught on video throwing a piece of bodywork at another fellow racer, and later on, violently charging and punching him on parc ferme.

A video uploaded to Twitter shows Corberi (wearing green and white Tony Kart suit) afoot on the side of the active track, presumably retired due to a collision or malfunction, purposely waiting for another racer to drive by so he can throw his front bumper at him. Once the kart he’s waiting on comes around the corner, he hurls the bumper hoping to impact the driver.

A second video shows Corberi coming up to the same driver he attacked during the race, but this time after the checkered flag while drivers are lining up at the scales, and violently charging him, throwing him against the wall and punching him in the helmet.

The victim in these two attacks has been identified as Paolo Ippolito, an Italian racing driver for CRG who’s a regular on the FIA karting circuit. At this moment it’s unclear why he was targeted by Corberi—one would think the two had some intense moments on the track that ultimately led to Corberi’s retirement—but that’s not confirmed at this moment.

According to Sports Bible, Corberi’s family either owns or manages the karting circuit where this took place, and has been a long-time champion in the multiple series that race within it. However, nothing currently explains what triggered the profoundly stupid moves—although to be clear—nothing could justify this behavior.

As a former shifter kart racer and dad to a daughter who also occasionally races karts, Corberi’s behavior is worthy of a multi-year ban from any form of racing, if not worse. The fact that his temper and lack of self-control can drive him to throw large, solid objects at moving vehicles is downright criminal.

The piece of bodywork Corberi threw at Ippolito looks like a CIK-FIA-homologated front bumper, which could weigh anywhere from three to six pounds and measure approximately four feet across. Considering these are crème-de-la-crème karts running $20,000 hand-tuned engines on a world-class track, the speed at which Ippolito and others were hit could easily hover around 45 to 65 miles per hour. Needless to say, enough to snap a neck or cause serious bodily harm.

FIA Karting Commission President Felipe Massa is, I’m sure, already aware of this, but so far no official word from him or the governing body.